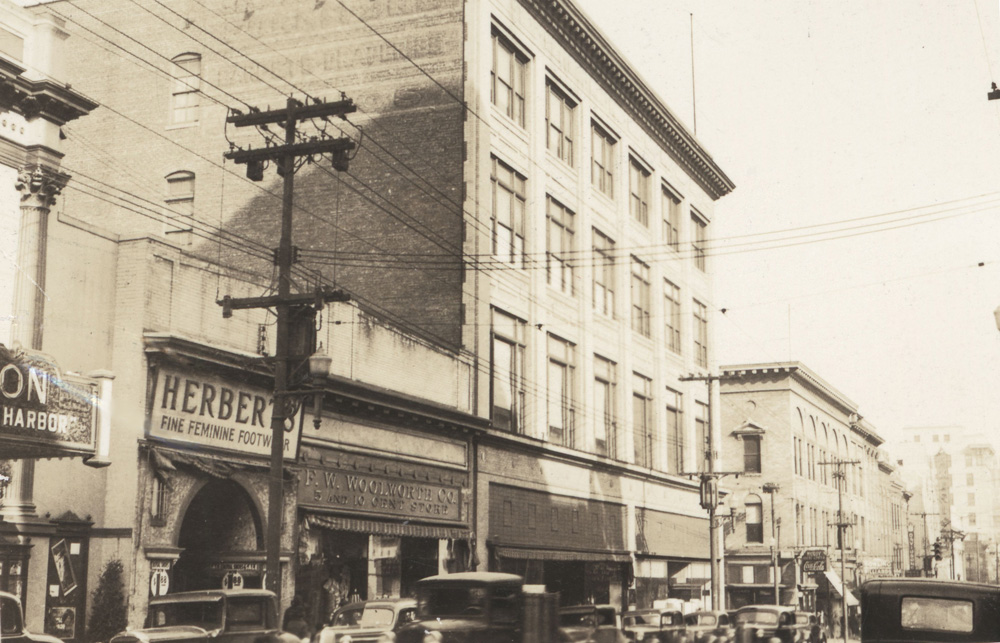 he history of the building at 401 South Jefferson Street involves several of Roanoke’s titans of commerce. Such names as Boone, Thurman, and Lynn are well-known in the region for their business sense and contributions to the general upbuilding of the city. To provide perspective, let’s turn back the clock to the late 1800s. A group of men moved to Roanoke who would greatly impact and influence the retail history of the city and the region.

Stewart H. Heironimus and Lynn K. Brugh, both from Hagerstown, Maryland, established a dry goods store in 1890 called Heironimus & Brugh. It was a small affair with just over 3,100 square feet located on Commerce Street (now 2nd Street). By 1898, the store moved to a new location on Campbell Avenue and doubled its floor space. Just a few years later, ca. 1905, Brugh retired and Robert Lee Lynn purchased his shares, and the store’s name was shortened S.H. Heironimus. Around that same time, the company installed Roanoke’s first freight elevator. In 1913 when S. H. Heironimus retired, Lynn purchased the store and kept its good name. Edgar A. Thurman arrived in Roanoke in 1890 with little more than the clothes on his back and a keen business sense. He found his first success in the produce commission trade before establishing a furniture company on Campbell Avenue in 1893. It was known as Overstreet & Thurman, then Thurman, Overstreet, & Boone, and finally, in 1906, Thurman & Boone Co. Inc. At the time, it was the largest furniture house in Southwest Virginia, and to accommodate its growing inventory, Thurman built the Thurman & Boone Building at the corner of Jefferson Street and Campbell Avenue in 1915. The store carried complete lines of fine quality furniture, draperies, rugs, pianos, and stoves. 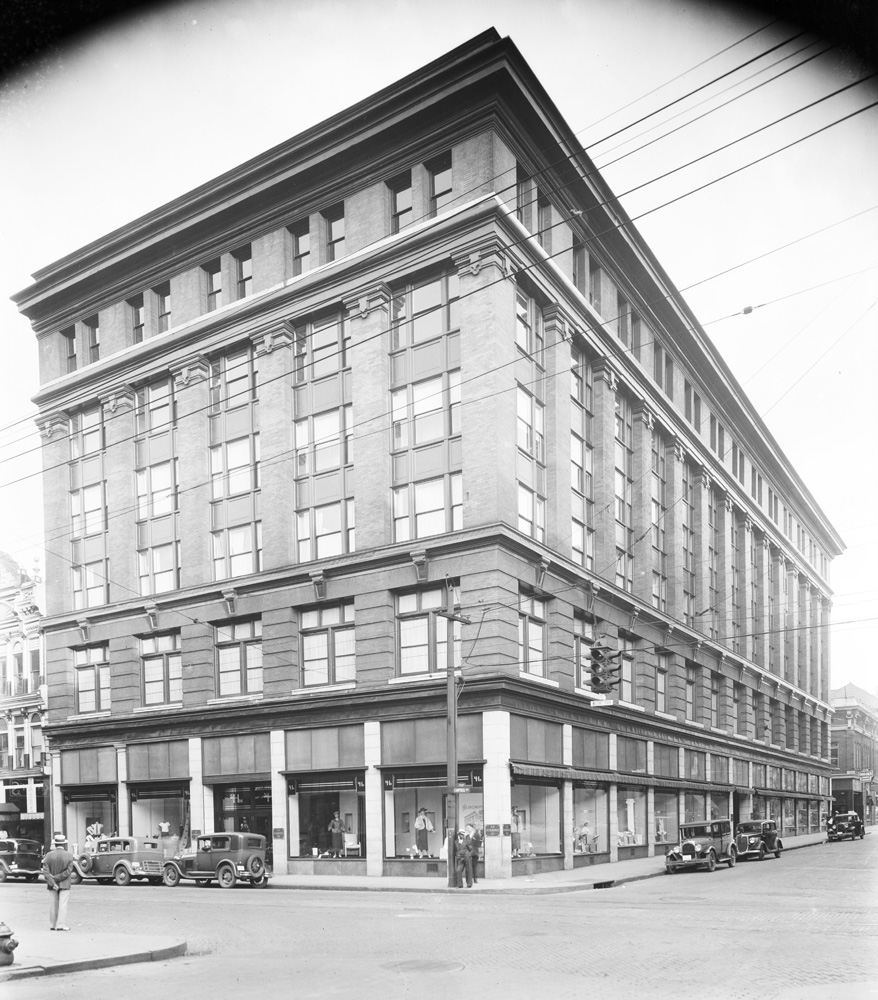 While Thurman & Boone Furniture was a large business, there was enough room for the S. H. Heironimus Store to share some square footage from 1915 until 1935. During that time, Heironimus used a cash trolley to send change back and forth from the wrap stand, where the customer was paying, to the central office on the mezzanine, where change would be made and then sent back. This system was a forerunner of the pneumatic tubes that functioned in much the same way and that are still in use at many bank drive-thrus today.
Incidentally, the building was also home to WDBJ for a short period between 1924 and 1926. The radio station was located in the Thurman & Boone Music Department. It's now known as WFIR, the second oldest radio station in Virginia and one of the oldest commercial stations in the United States.

In 1935, feeling the need to expand and grow its inventory, S. H. Heironimus moved to the MacBain Building at the corner of Campbell Avenue and First Street. Thurman & Boone Furniture remained in the building until after the passing of Edgar Thurman in 1952. A lifelong bachelor, Thurman’s will, which cut out nieces, nephews, and long-time employees, was surprising and led to a hotly-contested court case. In the end, his wishes were upheld and the Edgar A. Thurman Charitable Foundation for Children, which owned the building, was formed and continues to fund grants for youth-focused organizations in Southwest Virginia today.


In 1955, after the bank closed the furniture business, the Heironimus Store signed a lease and began work on a $1.3 million renovation plan, which included the installation of Roanoke’s first escalators. 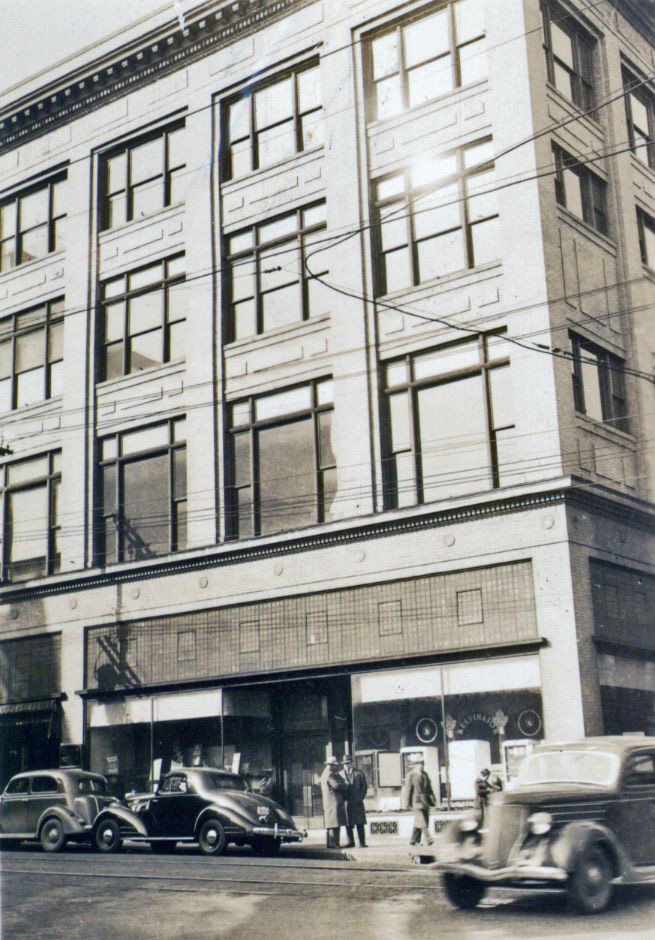 The Heironimus Store opened its new “old” downtown location to much fanfare in 1956. Inside the store featured everything from appliances and apparel to an Anticipation Shop (where one would find maternity clothing) and a beauty parlor. It even added a men’s wig-ery featuring synthetic wigs with sideburns. To put on a more modern style, the exterior of the building received a makeover with aluminum sheeting for a sleeker look.

The store had its own entrance to the S & W Cafeteria located next door. When it closed, a lunch counter, which was a popular stop for families, opened in the basement.
Heironimus continued to be an important part of the Downtown experience. It was very involved in the community hosting teen and women’s advisory councils, offering classes in knitting and other activities, and its window displays were the stuff of legend under the watchful direction of design artist James Powers. 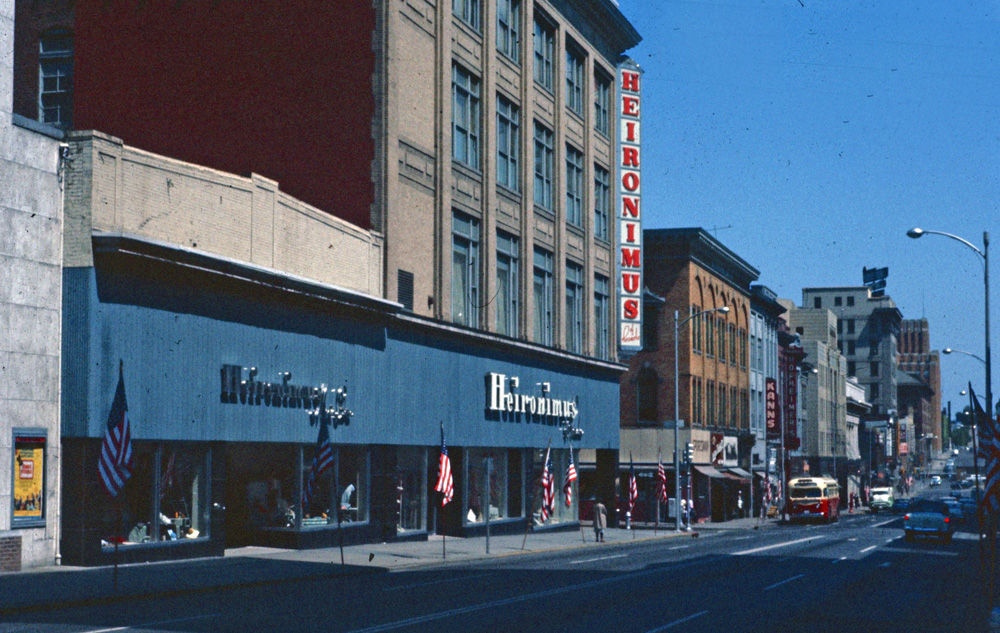 Doing business by the Golden Rule was the guiding star for Heironimus since the very beginning. From Downtown Roanoke, the store opened locations in local malls and shopping centers in Roanoke, Blacksburg, Lynchburg, and Salem along with a petite shop under a separate name in Virginia and the Carolinas. Leadership made a conscious decision not to open a location where it didn’t have name recognition. Even in the challenging times of the 1970s and 1980s, the business managed to survive and grow by developing its own niche.

In 1993, the Dunlap Company, a firm based in Texas and owning several other small retail chains, purchased the Heironimus stores from the Lynn Family. It began revamping the stores’ inventory to maintain a competitive edge. In 1996, Dunlap made the decision to close the flagship store in Downtown Roanoke. Its mall locations remained open until the last one closed in 2005. 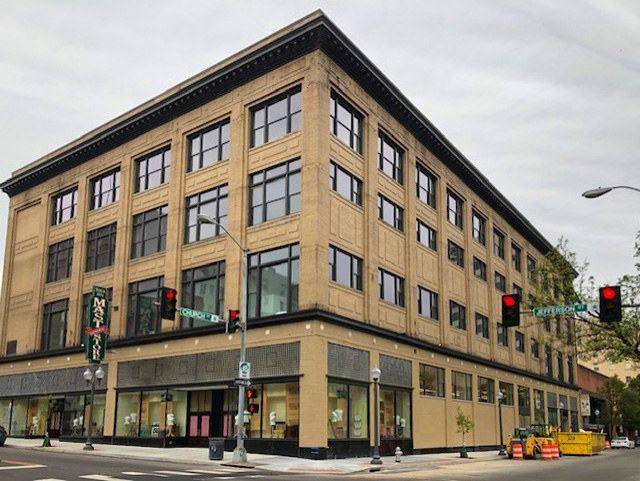 The building was sold by the Edgar A. Thurman Charitable Trust in 1997 to a developer who planned street-level retail with office and luxury apartments on the upper floors. In 1999, The Emporium had 30 retail tenants including a restaurant, a bakery, a grocery store, and several others. But, by 2005, the building stood empty. It is only by luck that it stood at all – thanks to an error in paperwork, the building was spared from the wrecking ball. The Monument Company from Richmond, Virginia purchased the building in 2018 with plans for apartments in the upper floors for new generations of downtown dwellers, and they partnered with the Mast Store to breathe retail life back into a building steeped in history and commerce.

It became a part of the Mast Store Family in 2020.

**Photos courtesy of the Virginia Room.