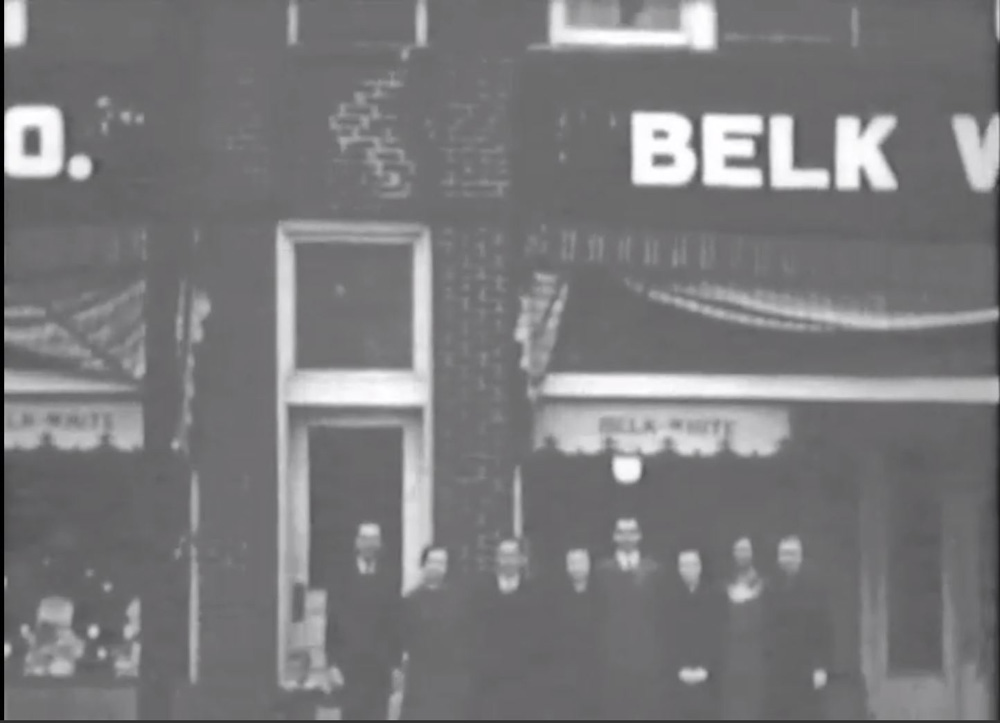 The Mast Store in Boone is sometimes referred to as the Old Boone Mercantile. It has a long and varied history featuring a virtual parade of businesses. The location is actually two buildings that work together as one, so we'll take a look at them separately.

The red-brick building was constructed in 1922 as the Johnson-Jones Building and was a part of a three-building complex that included a garage (that's now the next door lawyers' offices). When it opened the tenants included the Peoples Bank and Trust Company on the right side of the building, while the left side was occupied by a furniture store owned by J. M. Moretz. The upstairs area was host to the Watauga Telephone Company, which was later purchased by Bell Telephone and moved to a private home in 1928, a lumber merchant, and a dentist. 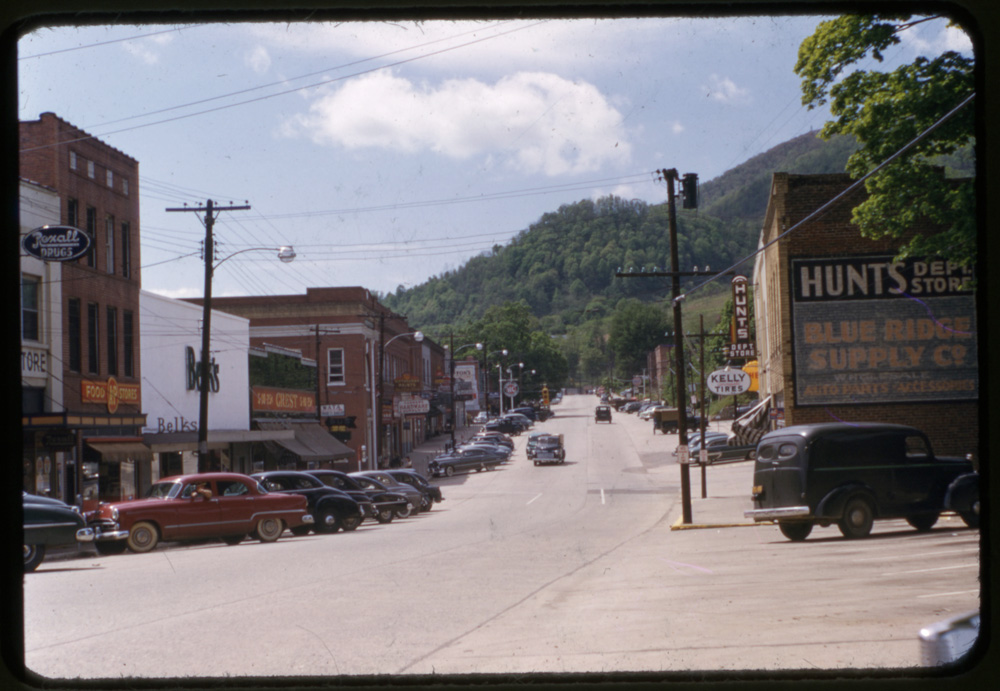 The furniture area was vacated in 1925 and Boone Clothing, which was also somewhere in the building, moved out making room for the Spainhour-Sydnor Dry Goods Company in the left side of the building. Spainhours was there for a short time before moving across the street into the Horton Building, home to the Horton Hotel now.

Several more apparel businesses cycled through including Harris Brothers (later Harris-Gaither), the Fashion Shop, and an alterations shop and Lillian Mae Beauty Shoppe moved in and out before Belk-White took over the space in 1935. Belk's in the early days had many partners throughout the state and would allow their partner's name to be attached to the store, like Belk-Leggett or Belk-Hudson.

In the meantime, the Peoples Bank went insolvent in 1933, a victim of the stock market crash in 1929. It was one of two banks in downtown with the other, Watauga County Bank, located just diagonal from this location. One of our long-time lawyers in town said that his wife got the marble countertop where the tellers would count change when the bank's assets were sold off. She used it to make mints! 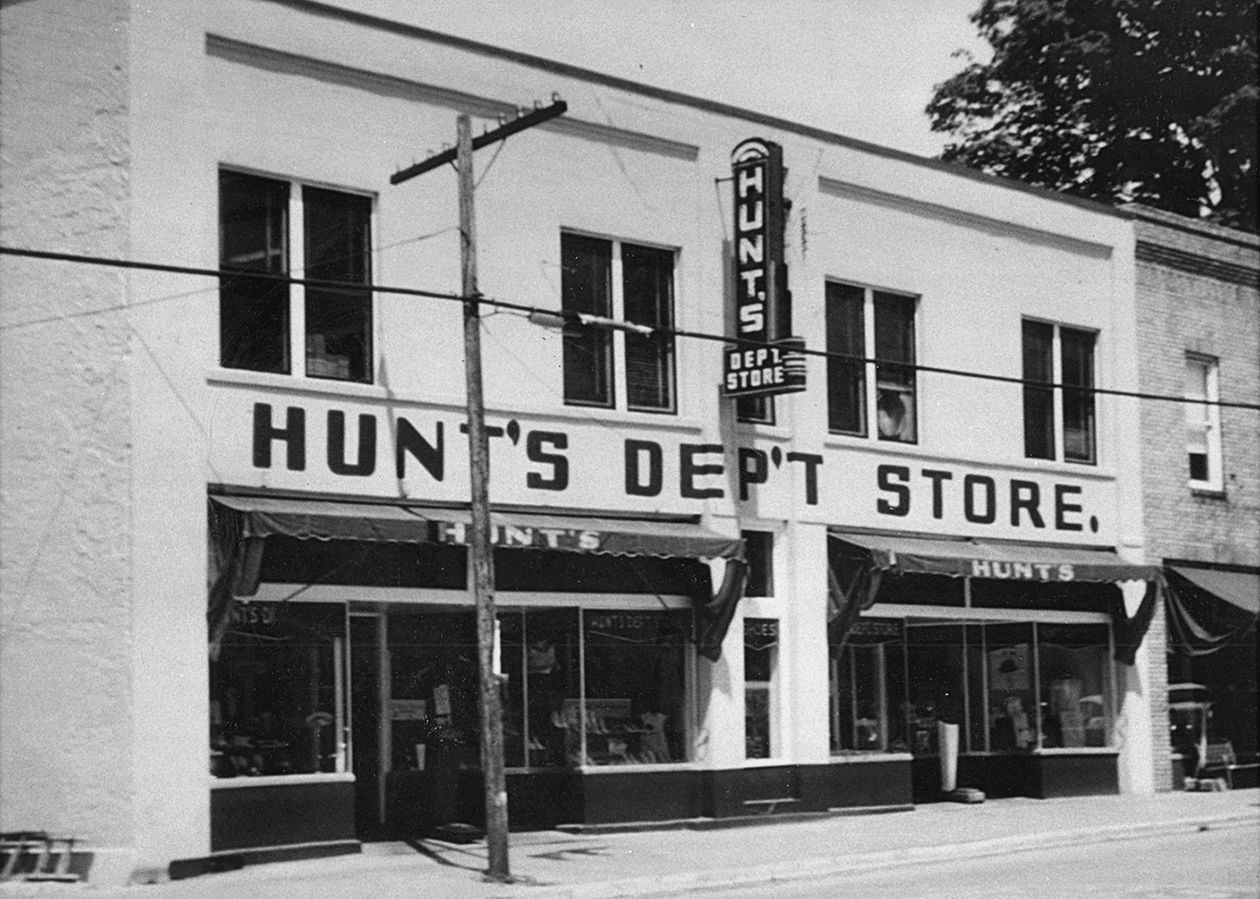 When Belk-White moved in, the two rooms on the bottom floor were joined for the first time, but the store's stay was short. It moved into a new building right across the street in 1937. Around that same time, the building was sold to Roger McGuire, who moved in his Rudemar Beauty Salon and re-opened it as McGuire's Beauty Salon. Other tenants in the building around 1938 included the Quality Shoe Store and Bare's Fair Store, which was managed by Guy Hunt (he figures prominently in this location's history).

A fire on the roof of the building damaged the upstairs apartments and Bare's, but Boone Photo, the beauty shop, and the shoe store suffered very little damage. In 1940, an RCA recording studio is opened, and in 1941 Kermit Dacus moved his radio shop into the building, possibly in the recording studio. He also starts broadcasting from WDRS, a bootleg radio station. Later, he moves the radio shop and station to the shops at the Appalachian Theatre. In 1943 Dacus was arrested on federal charges of operating an illegal radio station. 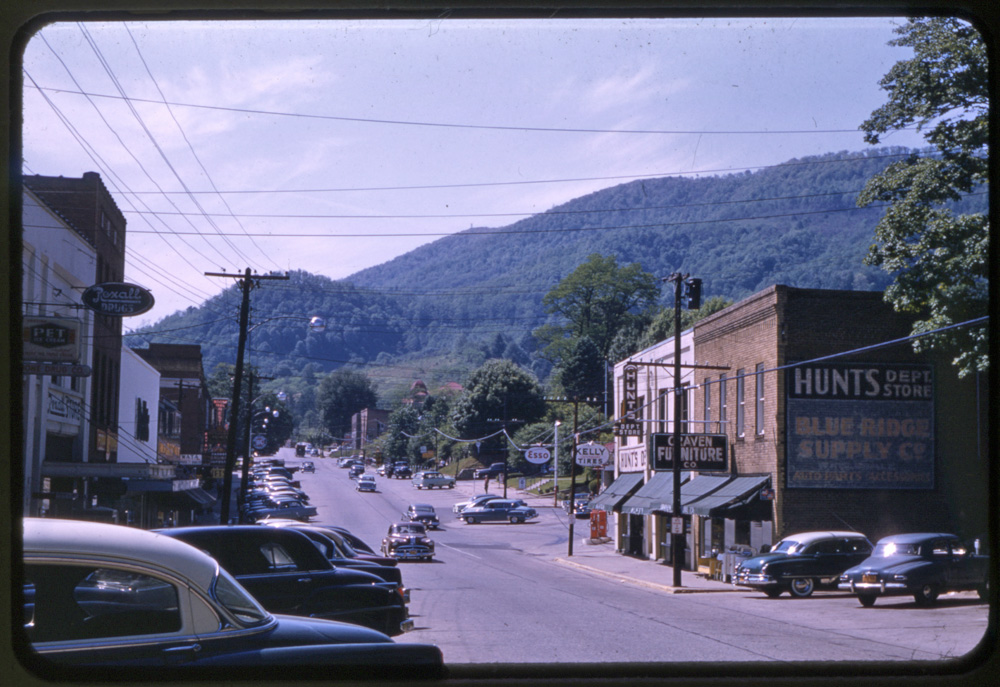 The relationship between Guy Hunt and G. T. Bare of Bare's Fair Shop dissolved in 1943. The Fair Shop moved out to another location on West King Street and Hunt began operating Hunt's Department Store in the same space previously occupied by Bare's. After repairs from a fire that damaged the shops on the second floor, also in 1944, Hunt's took over the entire building and operated for decades before selling the building to the Coopers in 1987. The Mast Store opened in 1988.

As an aside, while performing building maintenance and putting on a new roof, evidence of the fires was discovered in the upstairs shoe/outdoor department. It was also evident that repairs were made quickly because some of the roof joists were barely – if at all – attached to each other when crossing a span. Yikes! Another side note, the small window on the front of the building between the two entry doors was once a door. Behind it, a staircase led to the second-floor apartments/businesses. 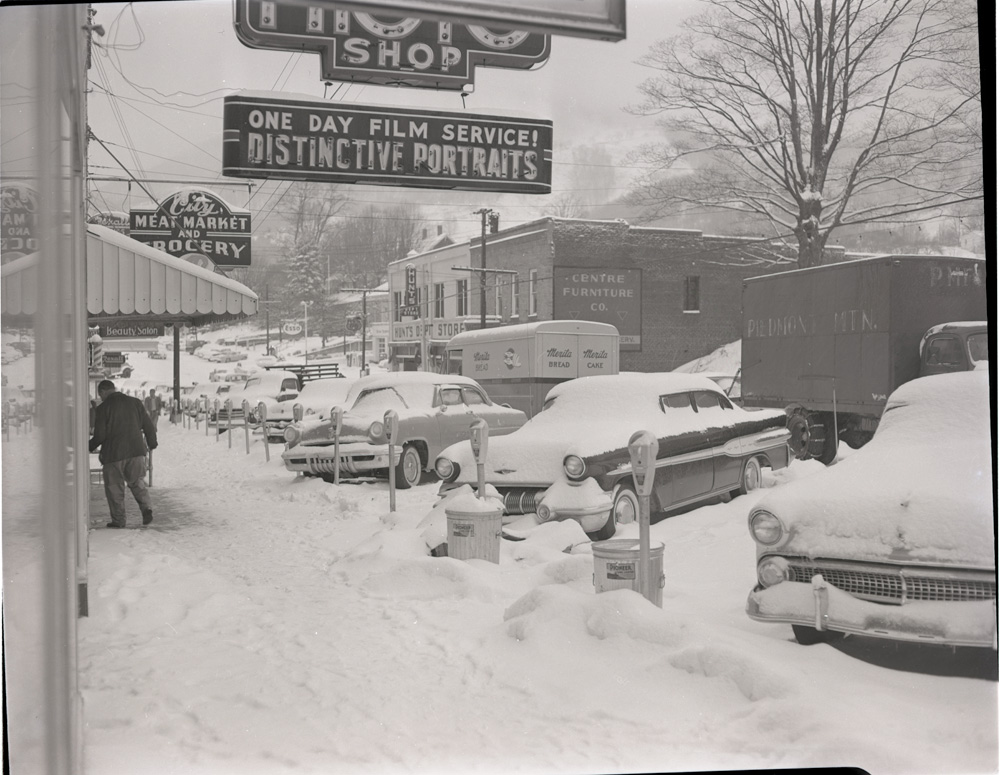 Now, let's take a look at the Candy Barrel side of the Mast Store in Downtown Boone. It was built as a separate building by W. R. “Ralph” Winkler in 1927. The original thought was to use the building as a garage and showroom for vehicle sales, but before the building was complete, he had changed his mind. It was instead leased to the J.B. Dick & Co. 5¢ & 10¢. The second floor was occupied by well-appointed apartments. 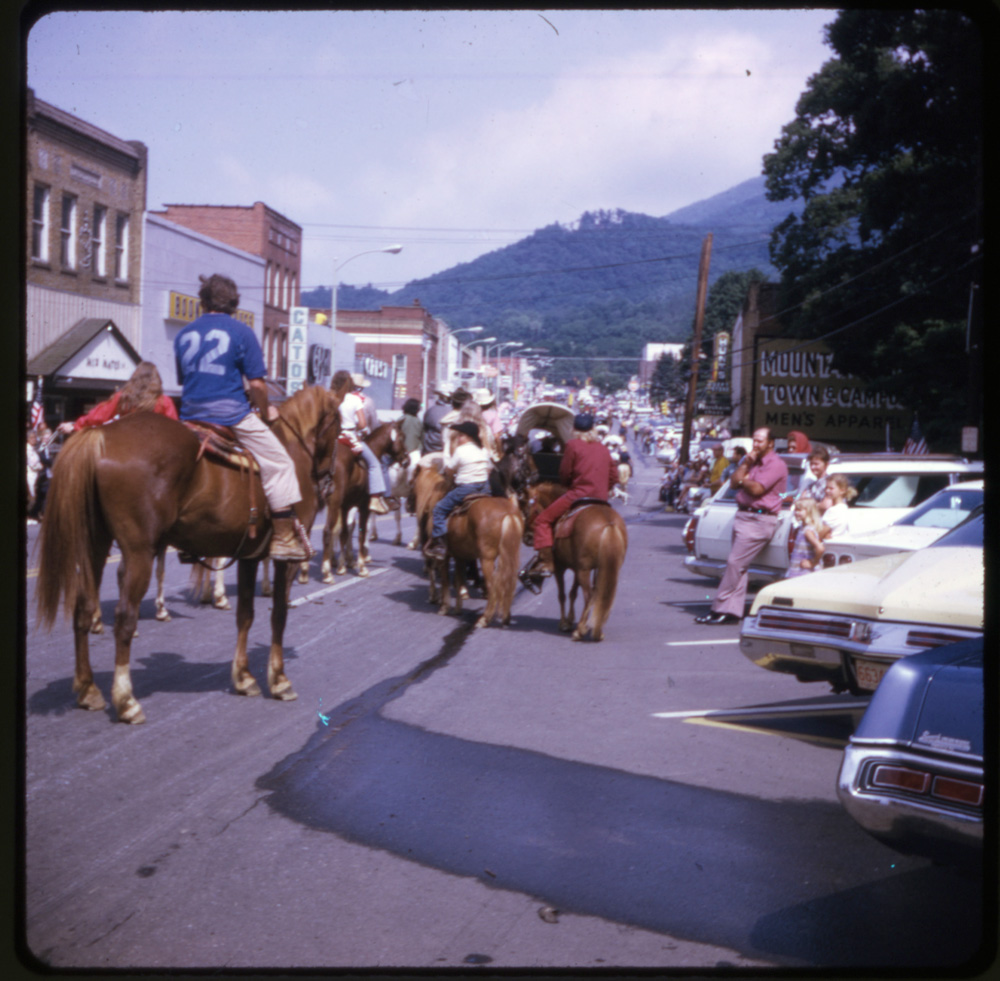 By 1945 another store moved in – Colvard Auto Parts. It changed its name in 1948 to Blue Ridge Supply Co. The International Resistive Company (IRC) used the building as a training location in early 1954 before completion of its factory on Greenway Road (Did you know that IRC made some of the components that were used on the Space Shuttle?). Then in April of 1954, Craven Furniture moved in after a fire destroyed its building in another part of town. The business was sold shortly thereafter, and the new owners held a “name that business” contest resulting in Centre Furniture operating in the building until 1959.

The decade of the 1960s saw a lot of turnover in the building. Keplars Soda Shop was on the first floor in 1960 and closed in 1961. Western Auto used the store as a toy annex for the 1961 Christmas season. Several rummage sales were held there in 1962. Blue Ridge Shoe Company used the space for training before opening its manufacturing plant on Greenway Road near IRC in 1963. 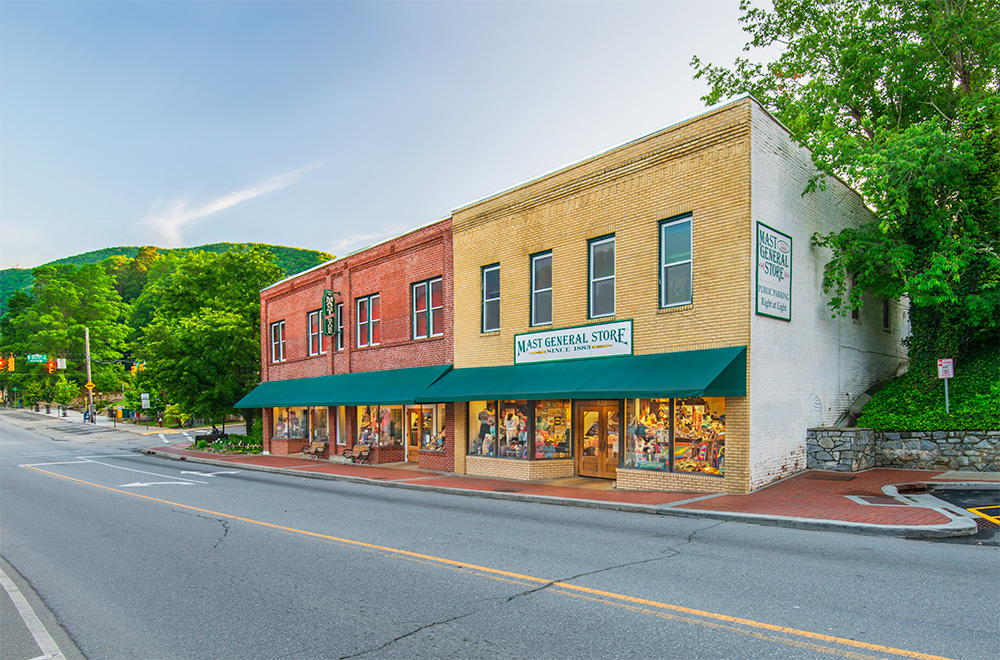 From 1963 through the mid-1980s, businesses occupying this location are difficult to track but includes Mountaineer Town & Campus. The Candy Barrel moved into the building in 1988. At that time it was a separate business owned by another couple in the Valle Crucis community. The upstairs part of the building was the mercantile department for the Mast Store. In 1997, the Mast Store made the Candy Barrel a permanent part of the store's collection of goods.

*Belk-White photo is a screenshot from the 1936 H. Lee Waters Film showing people in Boone and the surrounding area.

*The Mast Store in Downtown Boone circa today.

Mast Store is grateful for the research of Dr. Eric Plaag. His efforts helped us share a richer history of this location.