A City on Track 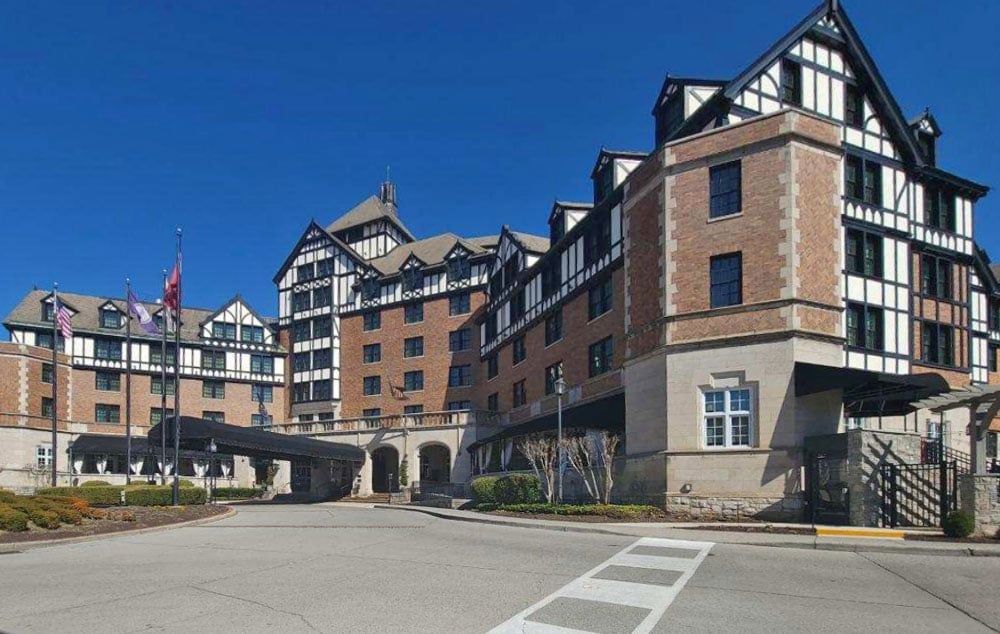 If you’ve never been to Roanoke, Virginia, you wouldn’t realize just how much a railroad defines the city. Series of rail lines consolidate and cut through the northern edge of downtown. They span east and west across the mountain valley where Roanoke lies.

The contours of the rails tell much more than Roanoke’s geography. They tell its history. The city, in fact, owes its entire existence to the railroad. There was no town of Roanoke prior to 1881. “Roanoke” referred to the Roanoke River Valley in the Blue Ridge Mountains of southwestern Virginia. It was only after two competing rail companies joined to form the Norfolk and Western Railroad that the city was created to serve as its hub.

One of the new company’s leaders, Frederick Kimball, saw the potential for development in a Roanoke Valley community called Big Lick. Despite a name as fittingly modest as its population size, Kimball knew Big Lick had both the location and foundation for what would be a massive undertaking. Directing a major railroad through the area meant turning Big Lick into a modern industrial center with offices, manufacturing, and infrastructure. 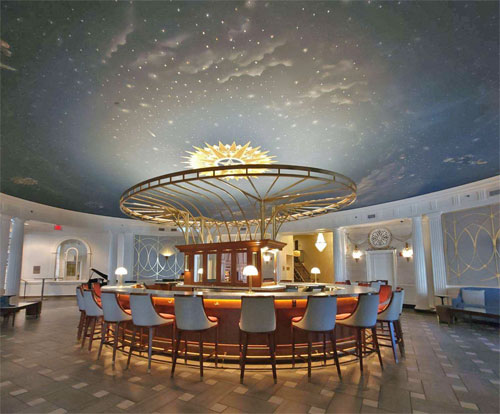 Also, on the trains would come passengers, and first-rate accommodations were needed to show off the grandeur of this newfound metropolis to all its visitors. So important was this point to Kimball that the construction of a single, showpiece hotel was written into the land surveying company’s original assessment of the city that would soon become Roanoke.

Kimball himself selected the site for the hotel. He chose a wheatfield on a hill north of the city center. There, his Hotel Roanoke would rise above the railroad tracks that would bring guests almost literally to its doorstep. Kimball’s site selection and the original façade’s Queen Anne architecture earned the hotel its elegant nickname, “The Grand Old Lady on the Hill.”

The name stuck and has accurately represented the Hotel Roanoke throughout its 140-year history. The hotel was a success as soon as it opened its doors in 1882. Its growth mirrored that of Roanoke’s once trains rolled through town regularly.

Hotel Roanoke was expanded and remodeled nearly constantly from its christening through 1938. Not even the Great Depression could slow its growth. Its appearance also evolved during this time, as did that of the city. In this era, Hotel Roanoke took on the ornamental, Tudor-style timbering that catches the eyes of locals and travelers today.

The only stagnant period for the hotel came more than a century into its life. The railroad that had become Norfolk Southern, which had exclusively owned and operated the building until 1989, decided to end its run as a hotelier. Before it dissolved its relationship with the hotel, however, Norfolk Southern found a prospective buyer in the nearby university, Virginia Tech.

After six years of shuttered windows and an intense fundraising campaign, the Blacksburg-based institute rallied local donors and found an investment partner in the City of Roanoke. Even Norfolk Southern contributed $2 million – an amount 30 times the railroad’s initial investment 100 years prior – to ensure Hotel Roanoke’s survival. 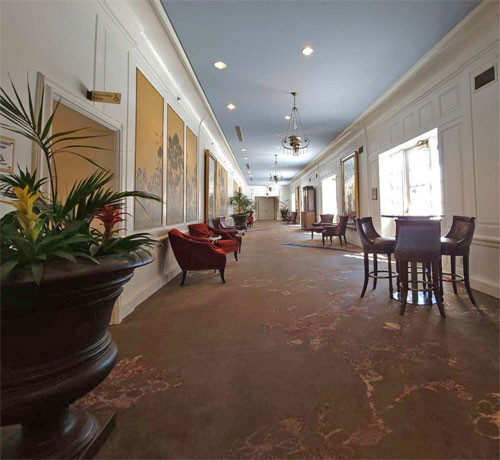 Following yet another major renovation and expansion in its storied history, the hotel reopened to the public on April 29, 1995, as the Hotel Roanoke & Conference Center.

Today, Hotel Roanoke & Conference Center maintains a reputation for excellence in high-end hospitality. It boasts a AAA Four-Diamond Designation, which is its third straight year of earning the honor, as well as the AAA Best of Inspector’s Award for housekeeping. It now has 329 guestrooms, including 18 suites, restaurants, a café, a bar, a spa, and a 63,000 square-foot conference center.

Hotel Roanoke has hosted past and future United States presidents, governors of the commonwealth, celebrities, and all Miss Virginia competitors since 1953. The four women who went on to become Miss America are honored with a special gallery at the entrance of the hotel’s Peacock Alley, which leads to the Crystal Ballroom. The state pageant was held there for decades.

New guests arrive at the hotel every day. More than that, new stories of the hotel itself are still being told. Each gives a new glimpse into the life of the city to which its own story is so closely bound.

According to a hotel representative, the Liberty Bell was briefly on view at Hotel Roanoke during a nationwide tour in the late 1800s. While the event received attention at the time, its documentation was largely lost to the hotel’s otherwise long memory in the century since. Also, one of the hotel’s restaurants, The Pine Room, was a World War II officer’s club where many local military personnel would dine and enjoy themselves before hopping the train to head off to their next appointment.

In Hotel Roanoke’s fine dining restaurant, The Regency Room, the food tells a story of its own. Of its many celebrated dishes, perhaps the one with the most acclaim is the unique staple, peanut soup. This seemingly humble appetizer originated in West Africa and has been served as a delicacy on tables throughout Virginia since colonial times. It is said to have been Virginia native George Washington’s favorite meal. Peanut soup can be found on The Regency Room’s menu every day, which is as often as the nation’s first president supposedly enjoyed a bowl.

Outside of the hotel, new voices arise from other places in Roanoke. They, too, tell the story of the city and its future. One such source of new voices, appropriately located straight across the railroad tracks from Hotel Roanoke, is the Taubman Museum of Art. 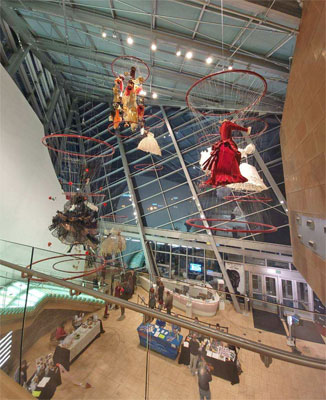 Opened in 2008, the Taubman’s design incorporates elements symbolizing the city’s surrounding Blue Ridge landscape and its landmark Mill Mountain Star. The museum’s contemporary exterior is the perfect counterpart to its neighbor, Hotel Roanoke.

The Taubman’s façade of geometric paneled glass and steel may suggest at first glance only the city’s future identity – much in the same way that the Hotel Roanoke’s exterior may suggest a yearning for the city’s past – but inside, a visitor will find both destinations to be inclusive and welcoming gathering spaces for a shared community.

The permanent collection at the Taubman features pieces by American masters like Norman Rockwell, John Singer Sargent, and Thomas Cowperthwait Eakins. It also includes cultural artifacts dating back millennia, including Egyptian ceramic figurines estimated to be 3,500 years old. Despite the structure’s contemporary appearance, the range of art on display shows the museum’s appreciation of history.

Although the Taubman is a far newer resident of Roanoke than its neighbor on the hill across the tracks, it’s collecting its own stories, not only through painting and sculpture but also performance and other media to represent a growing and diverse 21st-century city.

On the first weekend of March, for instance, the Taubman hosted a series of pop-up events allowing young performers to “take the stage” of its gallery floor. Students from Opera Roanoke and the Southwest Virginia Ballet put their training and talent on display in an event that was free to the public.

Lining the performers’ stage were booths tended by nearly 30 local artists, community advocacy groups, and cultural organizations. This new series of performances, demonstrations, lectures, and hands-on experiences called, “Roanoke Arts Pop,” highlighted how the present-day city is more than just a regional rail hub of the past and is now the cultural hub of Southwest Virginia.

Also, currently on display at the Taubman, is the traveling national exhibition, “Ruth E. Carter: Afrofuturism in Costume Design.” Carter is an Academy Award-winning costume designer who speaks about many facets of the African American experience through the medium of fabric.

The stories she’s told with her costume design have appeared in more than 60 movies and television series. In bursting colors, intricate patterns, and, with intense attention to the detail of every stitch, Carter’s costumes are captivating as standalone pieces of art.

The films that showcase Carter’s work include Black Panther, for which she made history as the first African American to win the Academy Award for Best Costume Design, Selma, Amistad, Malcolm X, Roots, Shaft, Coming to America 2, and 15 Spike Lee movies. On the long list of actors and actresses who have worn her pieces are Denzel Washington, Oprah, Samuel L. Jackson, Angela Bassett, Forest Whitaker, Eddie Murphy, Lupita Nyong’o, and, of course, the late Chadwick Boseman, who played the starring role in Black Panther.

From the threadbare garments of enslaved persons to New York street-chic fashions to Afrofuturism in superhero films, Carter’s designs are integral in conveying the spectrum of African American experience in the United States and the stories her art tells are indispensable to our culture.

This exhibition is a must-see on a visit to Roanoke, and there are still a few weeks remaining to enjoy it before its conclusion on April 3. While general admission to the Taubman Museum is free, the “Ruth E. Carter: Afrofuturism in Costume Design” exhibition is $10; $8 for students, seniors, or military; and free for museum members and youth aged 17 and under.

Whether told through architecture or art, commerce or costumes, hospitality or heroes, stories about life in Roanoke have always risen from the rail. The same rail that built the city into the place it is today will carry those stories along the track into its future and, at the same time, bring new stories along the way. As long as those stories keep being told, Roanoke will always be a railroad town.

Visit Roanoke has all the information you need to start planning your visit today.

24 Hours In Asheville, NC
Fall Hike on the Rattlesnake Lodge Trail
We're In This Together