The Rest of the Story

The first 94 years of the Mast Store were just the beginning.

In 1977, when the Original Store closed its doors that fall with plans to open the next spring, some knew what was coming… and it wasn't the re-opening in April. But, what they didn't see was a time when the store would become just as important to folks who live hours away as it had been, and continues to be, to its home community.

A young couple from Florida but with ties to the mountains found out that the old store was for sale. They had walked across its creaking floorboards and were fascinated by the old posters on the walls, the oil cans and farm implements on the high walls, and its genuine personality, that's the store AND the people.

John and Faye Cooper purchased the store in 1979 and set out on a journey of discovery. They moved their young family into the top two floors of the store and began the work of preparing to open. There were many questions, but the two most important were 1. What do we need to do to fit in with our community? And 2. What would an old general store carry that is still useful to our neighbors? That's where they started. 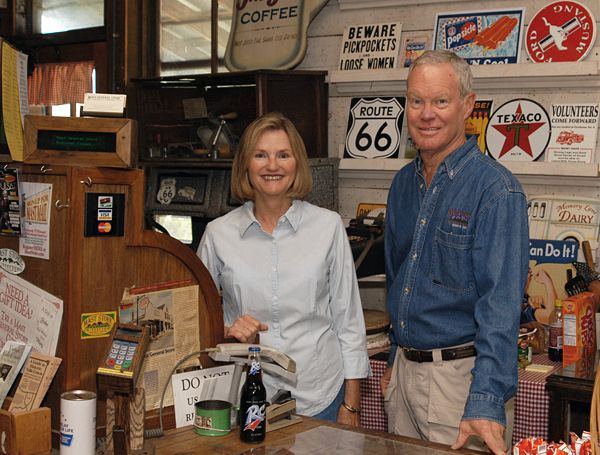 They listened to the locals as they dropped by to see what was happening behind the crooked walls of the old store. Next, they contacted the Mitchell Powers Hardware Co., a company that had served the store since the early 20th century, to see what they carried in their collection that would fit well at the store. They picked tin pails, washboards, nuts, bolts, nails, Saturday Night Specials, and expanded the collection as they could.

When the doors were flung open on June 3, 1980, there were two rooms filled with merchandise that would serve the local community and even a little that would be of interest to those from afar. Milk, bread, cast iron, feed, chicken scratch, mouse traps, locally-made bonnets, berry baskets, overalls, etc.; it was a long list of a bunch of little things.
More and more locals started to come back in, and the word spread about the Mast Store being open again. The next chore to accomplish was re-opening the post office, which was high on the list of important things the locals wanted. Once a community loses its post office, it's not long before it falls off of maps and out of people's memories. Valle Crucis is an important place, and it was important for its official sense of place to be recognized.

After several tries, the Valle Crucis, NC 28691 Post Office was re-instated as a contract station of the Banner Elk Post Office. It is the only way to have a Valle Crucis mailing address because the valley is split up into three different rural delivery addresses: Sugar Grove, Banner Elk, and Vilas.

Recently, a part of Watauga County's past has been brought back to life. The Mast General Store in Valle Crucis, NC is now open and offers a delightful return into a nearly forgotten time. Whether it's your weekly shopping that needs attention, or just your curious nature, you are sure to find the Mast Store a pleasant experience. (in a letter from a local realtor, dated July 1980.)
News articles regarding the store's opening appeared in newspapers locally and off the mountain… even in the Coopers' former hometown of St. Petersburg. Travelers were already validating their ticket for time travel at the Mast General Store, but in late 1986 and early 1987, two articles helped even more people meander our Broadstone Road. In November, Southern Living ran a short story about Howard Mast, the Mast Store, and the Mast Farm Inn. In mid December and early January, travel journalist Charles Kuralt began his syndicated column with… "Where should I send you to know the Soul of the South? I think I'll send you to the Mast General Store." Running in papers across the country, tourists wanting to slow down came from every nook and cranny you can think of, and all were carrying a copy of Kuralt's article.

In the late 1890s and the early 1900s, there were several Mast Stores in the area. They were owned and operated by Mast brothers and cousins. In the 1980s, "new" Mast Stores began appearing.

The Mast Store Annex, just 2/10 mile, from the Original Mast Store was added out of necessity in September of 1982. The bridge was out in front of the Valle Crucis Elementary School, so you couldn't make it to the Original Store without either fording the creek or taking a lengthy detour. It was heading into Labor Day weekend… what would you do? An opportunity presented itself when the owners of the Annex asked if the Coopers could use part of the building. Yes! Part of the stock from the Original Store was moved to the Annex, and that's how the fashion department began to grow.

The Outdoor Department was added in the upstairs part of the Annex in 1985 initially to provide men an interesting diversion while their female counterparts shopped for sweaters and jumpers. Needless to say, it's grown beyond that now.

Mast Store's Old Boone Mercantile is located on Downtown Boone's King Street, only eight miles from the Original Store in Valle Crucis. It became a part of the Mast Store family in 1988. Operated as the Hunt's Department Store since the 1940s, Mr. and Mrs. Hunt were retiring and looking for a business to fill the store. As it would happen, the Coopers were concerned about the amount of traffic making its way down Broadstone Road and thought it might be a good idea to have another location to help alleviate some of it. The timing was impeccable.

The Little Red Schoolhouse was once called "The finest school in all of Watauga County." It was also the county's only high school, offering grades 8 and 9, in 1907. Originally, it was located behind the Valle Crucis Methodist Church. It has been moved three times, and before it became a part of the Mast Store Family in 1989, it was a tobacco barn. Today, it hosts special events and special sales throughout the year.

Waynesville was the first town to knock on our door and to ask us to come to their downtown. Just a short drive down the road, a visit to their up and coming Main Street was all it took, well, that and a building that really spoke to us. In 1991, the Mast Store in Waynesville opened with fixtures rescued from another old department store and our unique blend of merchandise.

In 1995, the 1905 Syndicate Building in Hendersonville was added to our family of stores. Hendersonville was refocusing attention on its Main Street and was looking for key elements to ensure growth in their downtown. The Mast Store fit well with its mix of retail, restaurants, and services.

Asheville is a hub of activity in Western North Carolina. In 1999, the old Fain's Department Store on Biltmore Avenue joined the Mast Store Family as our outpost in Asheville. It took a while to find just the right location, but you know it when you see it. Located just off Pack Square, one of the city's oldest sectors, the building dates back to the 1940s and holds many endearing memories for residents of Asheville.

With the mountains of North Carolina covered, opportunities for new "old" locations were being presented everywhere. Greenville, South Carolina had been working on the rebirth of its downtown since the 1980s. When the call came asking for a visit, the perfect building was described. Once home to regional retailer Meyers-Arnold, the Mast Store in Greenville opened in 2003.

Knoxville, Tennessee was actively working on its downtown Renaissance with an active community on Market Square, the restoration of its local movie palace, the Tennessee Theatre, into a destination for live performances, and the scheduled renovation of the Riviera to bring families of moviegoers to Gay Street. Restaurants were popping up and a building with a long retail history came available right in the middle of it all. In 2006, the Knoxville Mast Store opened.

Now that's a capital idea! A location in a state capital. Our Columbia, South Carolina location opened in 2011. It truly is an old location with history stretching back to the 1870s. There were two retailers that called the Mast Store in Downtown Columbia home for more that 40 years each—?Efird's, which was a main competitor of Belk's in the mid-20th century, and Lourie's, a fine clothier. With Columbia's focus on revitalizing downtown and more and more people and students calling it home, it was the place to be.

Welcome to the Family! The Mast Store's newest "old" location joined the Mast Store Family in May 2015. Located on Trade Street in Downtown Winston-Salem, the old Brown-Rogers-Dixson Hardware Store was the city's largest retailer when it opened in 1928. It was also one of the South's largest retail/wholesale floors. B-R-D's motto was The Best Place to Get It. We hope to carry on their fine tradition in a downtown that is re-inventing itself.

Our growth as a business is slow and measured. We always want to make sure that we know and understand our new communities before moving into a new one, so current plans call for growing a new "old" location about every 3-5 years.

The Mast Store realizes that we all need to do what we can to move toward sustainability. But, we also realize that in some aspects, it is difficult, if not impossible, to proclaim that you are truly sustainable. With that said, we are doing the best that we can and trying to do better as we can.

Sustainable is the ability to endure and to remain productive while lessening any negative effects on the environment, culture, etc.

From an environmental perspective, the Mast Store seeks out avenues to recycle our paper, cardboard, plastic, glass, and metal waste. Our fluorescent light bulbs are recycled. We offer our employees incentives to consider alternative transportation to work—walking, carpooling, biking, or taking public mass transit. To offset some of our carbon footprint for our deliveries, we contribute to green power sources.

Our buildings are older and utilize existing infrastructure to reduce the need for new construction and sprawl.

The Mast Store gives back to our communities in three major focus areas—?arts, environmental, and human services. We encourage our employees to give their time to groups that they are passionate about by paying for up to 8 hours of volunteer time each year. And, we also have a matching funds program to encourage monetary donations.

Our fixtures that are constructed in-house are made of reclaimed wood or lumber from sustainable forestry sources.

Many family businesses face the dilemma of how to make sure the business continues on after the original owners have moved on. Some pass it to children, while others make no provisions at all. John and Faye Cooper made a conscious decision to pass it on not only to those who are helping to keep the traditions of the old general store alive every day… the employees. Of course, their heirs will have some interest in the stores, but each year, the individuals who help you find the best shoe for your activity or the right gift for that someone special are earning shares of the business.