We Know You'll Fall for Greenville 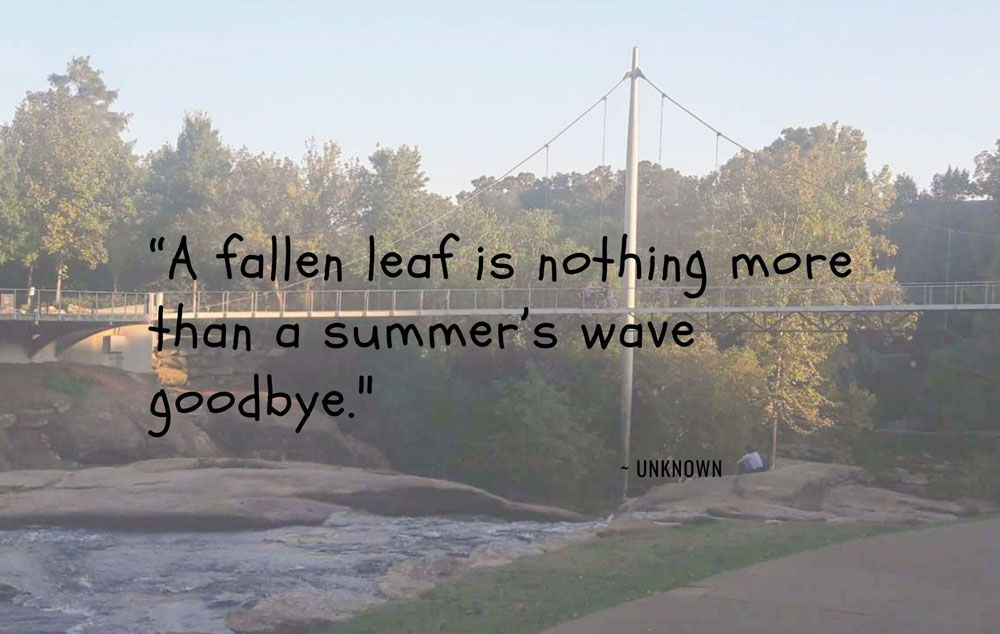 Greenville, South Carolina, is a city that has undergone a recent and oh-so-familiar “downtown revitalization.” While these city projects have varying degrees of success, in Greenville’s case, the revitalization has blossomed into a full-fledged revival.

Since Mast General Store opened its doors at 111 North Main Street nearly twenty years, dozens of new restaurants, coffee shops, breweries, galleries, and boutiques have sprung up across the district. It’s quite the transformation, and the bustle is reminiscent of Greenville’s days as a thriving mill city in the late 19th and early 20th centuries.

It was a confluence of nature and geography – a confluence of rivers, in fact – that brought industry to the city at the dawn of its first heyday. Situated in the hill country of Upstate South Carolina, Greenville became the Palmetto textile capital as mills opened along the town’s many riverbanks at the peak of the Industrial Revolution, powered by rushing water. 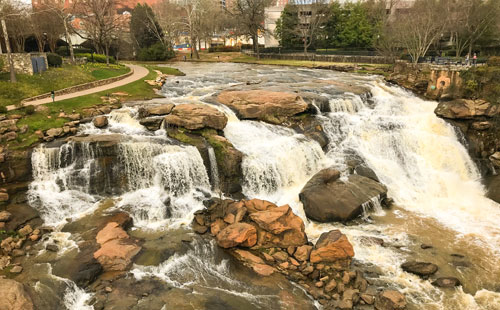 Appropriately, a river provides the focal point of Greenville’s contemporary renaissance. As color fills the autumn leaves, Falls Park on the Reedy serves as a natural refuge to remind locals and visitors alike of how the city’s positioning in the foothills of South Carolina sets it apart from its Lowcountry neighbors through its deciduous foliage and its tumbling terrain.

A tour of Falls Park merits the trip to Greenville in itself. Redevelopment of this 26-acre oasis, situated on reclaimed industrial land that had been heavily polluted and untended through the entire latter half of the twentieth century, was jumpstarted in the 1990s, and the project has since earned national honors in the fields of urban planning and eco-tourism.

Today, you can stroll across the Liberty Bridge, a 355-foot pedestrian suspension bridge, amidst the changing treetops while overlooking a mini-falls created by the cascading Reedy River without ever leaving the heart of the city. The view is a reminder of Greenville’s transformation from colonial wilderness to an industrial hub to a city with renewed purpose and energy and ready for a new era all while the river at its center plunges forward.

Running through Falls Park alongside the Reedy River is the Swamp Rabbit Trail. This nearly 20-mile multi-use greenway connects two of the city’s institutions of higher learning: Furman University and Greenville Technical College. Following the path of an obsolete railroad line, its another example of how the city has turned its industrial past into its active present.

Greenvillians do love their outdoor time and their sports, too! Nearby Clemson University provides one of the best college football Saturdays any team in the country can boast, while the newly-formed Greenville Triumph are gaining acclaim and popularity, making many fans of men’s semi-professional soccer in this town. Catching either team’s game makes for a terrific fall afternoon. 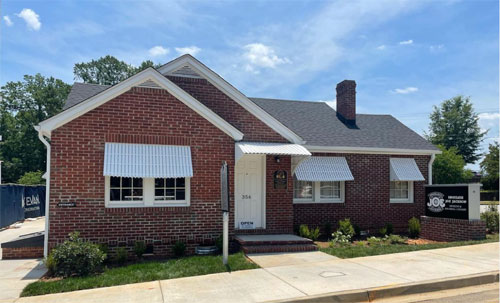 Speaking of sports, Greenville is home to several museums and one of its most unique is dedicated to perhaps the city’s most famous hometown sports hero… or antihero. “Shoeless” Joe Jackson, a prodigy of the early-era baseball diamond, is sadly still best remembered for his involvement in the Chicago “Black Sox” scandalous plot to throw the World Series. Whether a victim, a villain, or a forgotten legend, Jackson’s career and life story are part of the Fall Classic’s lore. Visit the Shoeless Joe Jackson Museum and Baseball Library while you’re in town. Image from museum website.

As for niche museums of a different order, music lovers will be intrigued by the Sigal Music Museum. Voted one of the top five best new museums in the nation in 2020, the Sigal showcases some of the most historically significant instruments from the past 400 years, including a harpsichord once owned by Queen Charlotte and played by another prodigy in his own right… 9-year-old Wolfgang Amadeus Mozart.

A city with its heart in the outdoors can’t be without a fantastic science museum, and Greenville has it in Roper Mountain Science Center. With facilities devoted to Environmental Science and Sustainability and Natural Science as well as a planetarium and observatory, this museum teaches us all many important lessons about our world and our fragile, interconnected environment. If you’re traveling with the whole family, the kids will have a field day on the Dinosaur Adventure Trail or in the butterfly garden. 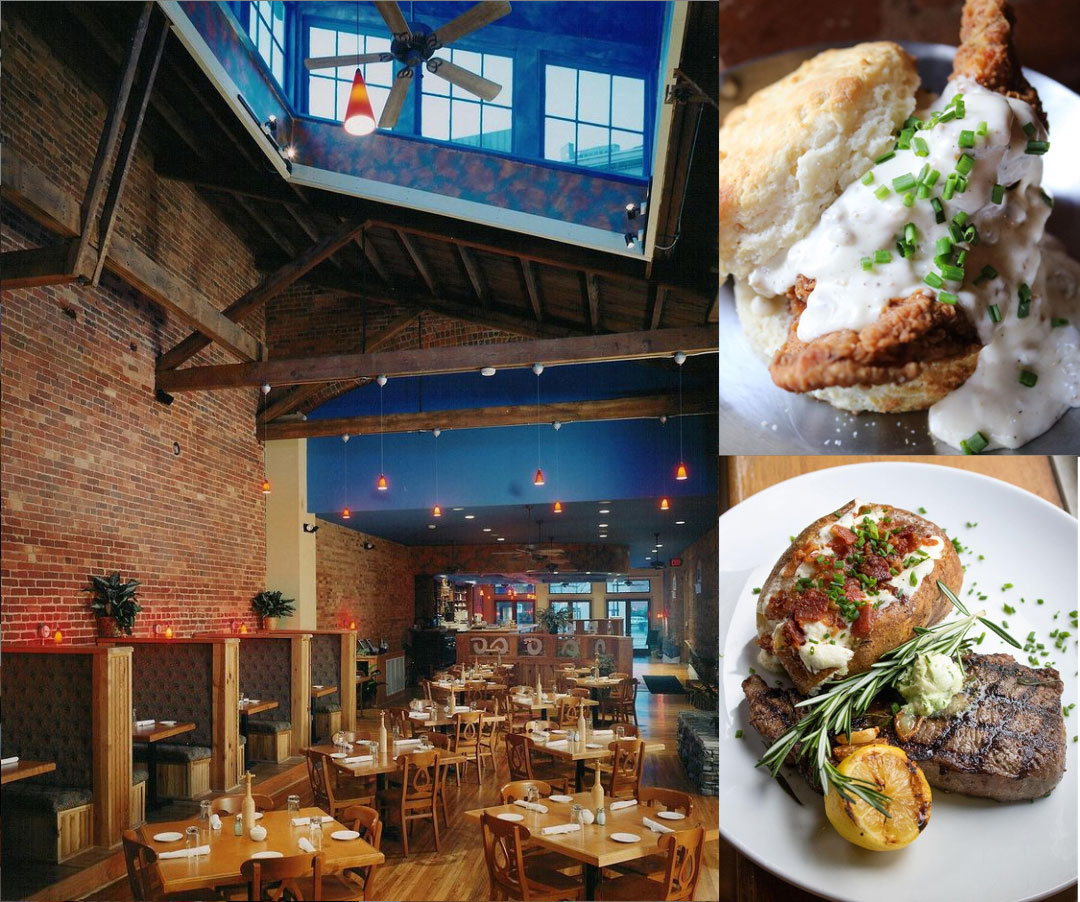 No autumn day out in the park, on the field, or inside the museum would be complete without an amazing dinner. We recommend Soby’s in Downtown Greenville. Known for its “New South Cuisine,” we’re lucky to have this award-winning restaurant around the corner from Mast General Store, especially when we’re hungry! Images borrowed from Soby's Instagram

If your appetite is up for something a little… shall we say… “more exciting” than fine dining but just as seasonally-appropriate, you still have time to make it for the 40th Fall for Greenville Festival. This fall ball kicks off with concerts at 5 p.m., Thursday, October 7, at the intersection of Main and Augusta in Downtown Greenville. The festival carries on through Sunday evening, October 10, and features 75 bands, 50 local restaurants, and 50 area breweries and wineries. What better way to end your Greenville fall weekend than with a taste of the fun and fancy samples this 21st-century city has to offer?