Wandering into Roanoke's Way Back When Guess what. We opened our newest “old” location during the height of the pandemic. We were asking ourselves, “Have we gone mad?” There were so many hurdles to jump and challenges to overcome, but we had a great staff and everything was in place and ready.

And it’s been open for a year now. My, how time flies when it’s getting back to normal. 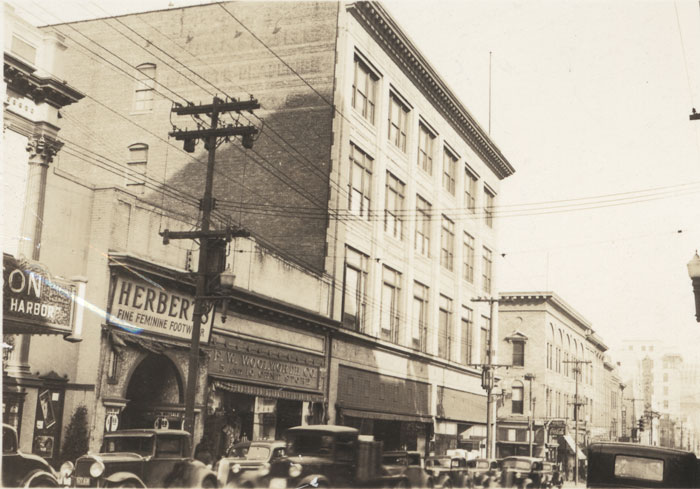 The old Heironimus Department Store building was one of the most talked-about landmarks in Downtown Roanoke. And sometimes not in a good way. The structure with almost 90,000 feet of available space was both an opportunity and a curse.  It was called a “white elephant,” “an albatross,” and a waste of good parking space. In some ways, it’s a miracle that it is still standing at all. It was set for demolition sometime after 2005, but an error in the paperwork saved it from the wrecking ball.

Thanks to the stick-to-it-tiveness of the City of Roanoke, downtown has a “new” showplace for shopping and for living! Lisa Soltis in the Department of Economic Development for the City of Roanoke didn’t lose heart. She and her predecessors continued to think creatively and to look for partnerships where they might be found. Fortunately, an opportunity presented itself when Monument Company from Richmond, Virginia, purchased the building to retrofit the upstairs with apartments and have retail at street level.

Thank goodness for paperwork errors! The story behind the old Heironimus Store is a good one, and one that Mast Store continues to share alongside its own.

Constructed in 1915 as the Thurman & Boone Building, it was home to one of the region’s largest furniture houses. The stock included everything from rugs to stoves and pianos to draperies. There was still room for the S. H. Heironimus Department Store to share part of the space from 1915 until 1935. WDBJ Radio (now WFIR) even had its studio for a short period of time in the Thurman & Boone music department.

In 1935, Heironimus was continuing to grow and needed more space, so it headed to the MacBain Building. Thurman & Boone Furniture remained in the building until Edgar Thurman’s passing in 1952. He was a lifelong bachelor, and without having close relatives, his last will and testament was the talk of the town AND the subject of a lawsuit. It cut out all nieces, nephews, and long-time employees and associates. But it did set up the Edgar A. Thurman Charitable Foundation for Children, which still has an impact on individual children and agencies working on behalf of children in Southwest Virginia. It also continued to own the building, which provided some of its income.

The bank eventually closed the furniture business, and that brings us back to Heironimus. A new lease was signed in 1955, and a $1.3 million upfit started. The Heironimus Department Store reopened at the corner of Campbell Avenue and Jefferson Street in 1956 with much fanfare. The renovations included the installation of the region’s first escalators. These are still visible on the first floor at the center of the store. It’s amazing how narrow they are compared to the escalators we use today. 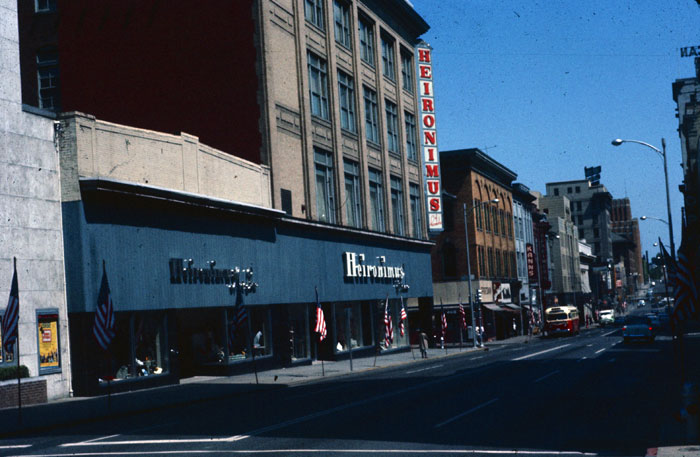 In addition to your typical men’s and women’s departments and “the Wig-ery,” where men could find the height of fashionable, interchangeable, and completely synthetic hairstyles, Heironimus offered classes in knitting and hosted advisory councils for teens and women.

The exodus to suburbs and indoor shopping malls allowed Heironimus to continue to grow. They were a regional anchor for several local malls and shopping centers, but these stores started to eat away at its flagship location in Downtown Roanoke. The Lynn family, which was the driving force behind the Heironimus name since the early 1900s, decided to sell the store to the Dunlap Company, which owned several other small retail chains. Dunlap decided to close the downtown location in 1996. Then, in 1997, the Thurman Charitable Trust – it’s amazing, they owned the building the whole time – decided to sell the property to an outside developer with plans to have street-level retail and luxury apartments upstairs. The Emporium eventually had several small niche retailers, but it was short-lived. The building was vacant again in 2005.

Two fantastic regional retailers had homes in this beautiful building for 40 years each. That’s an amazing story. They participated in their community and contributed to its story. The Mast Store hopes to be a part of Downtown Roanoke and the greater community for many years to come.

**Photos courtesy of the Virginia Room at Roanoke Public Library.

Fall Hike on the Rattlesnake Lodge Trail
We're In This Together