Cape Lookout National Seashore includes a Visitor Center on the Mainland at Harker’s Island, North Carolina, as well as Shackleford Banks and North and South Core Banks. You can reach the Cape Lookout Lighthouse and Shackleford by ferry (from Beaufort or Harker’s Island), or if you are adventurous, by paddling out on a kayak.

As a little girl, I became fascinated by the wild ponies that roam free on the barrier islands of Virginia and North Carolina; I’m thinking that was after I read Misty of Chincoteague. I’ve always wanted to see the wild ponies in their natural habitat.

These horses were marooned on Shackleford after Spanish Galleons ran aground in the shifting shoals of the Graveyard of the Atlantic. They’ve adapted to their surroundings and subsist on grasses and brackish water, and they are much smaller than you’d imagine. An adult horse stands about 12 hands tall at the shoulder, which is around 48 inches. Using my imagination, I think about how sturdy they must be to carry the Conquistadors, along with their armor and armaments, while they were exploring the New World.

The herds on the island are managed to maintain their environment and the strength of the breed. The horses roam the island, so to see them you’ll need to do some walking. Make sure to bring your binoculars and a zoom lens for photography. The Park Service recommends that you stay at least 30 feet away from the horses. They are wild animals and can be unpredictable and protective of their groups. The other reason you’ll want to bring binoculars and a long lens is the pests are out in force when it’s warm. You’ll want to stand on the edge of the beach and peer inland to escape the biting flies and no-see-ums.

On your ferry ride over to the island and while you’re walking on the beach, keep an eye out for dolphins. We saw a pod during our visit.

Also, a part of the Cape Lookout National Seashore is the Cape Lookout Lighthouse. Its diamond-shaped daymarks make it easy to know where you are along the North Carolina Coast. To add another reference for seafarers, the black diamonds point north and south and the white ones east and west. Constructed of 600,000 bricks, the walls of the lighthouse are 9 feet thick at the base and 1 foot 7 inches thick at the top. This light is still used to guide ships and was automated in 1950. The United States Coast Guard at Fort Macon maintains it.

The structure you see today is actually the second lighthouse. The first one was built in 1812. It was a little further inland (you can see a hump where the structure was). At only 107 feet tall, its light was produced by 13 oil lamps and parabolic reflectors projecting the light 16 miles out to sea. The Cape Lookout Lighthouse you see today was operational in 1859 and used a Fresnel lens until 1979. This lens focused the light to be seen at 18 miles. 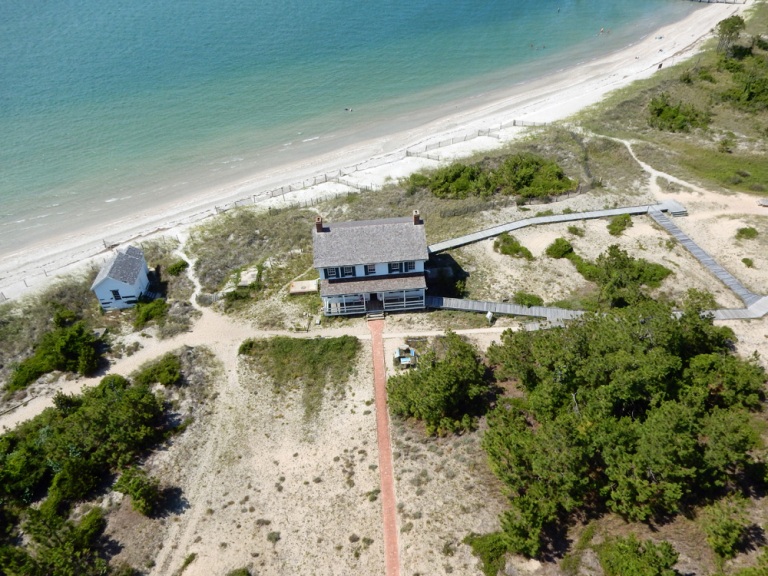 Located at the base of the Lighthouse is the Keeper’s House. Today, it features a museum telling the story of the lonely life of the keeper and of the Surfmen, a group that often had to rescue sailors whose ships were stranded on sandbars or were otherwise in distress in the shallow and treacherous waters. Be sure to pick up the “can of oil” and imagine yourself carrying two of these 45-pound cans up the 200+ stairs at least twice each day.

Here’s the bonus on the visit to either Shackleford or the Cape Lookout Lighthouse, the beaches are great for shelling and they were voted by readers of USAToday as some of the best beaches in the National Park Service. For more information to plan you trip, visit their website HERE.