An Interview with a Tree 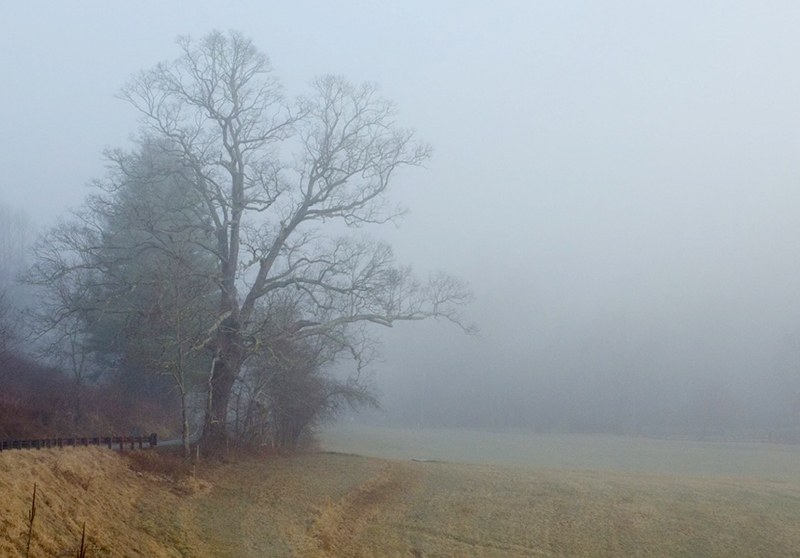 Capturing the oral history of our parents and grandparents can be an interesting adventure. Posing questions at the supper table during family holiday gatherings reveals life's highs and lows, which are often related with humor once the elation and the sting have had a chance to fade. It’s how we learn more about who we are and where we came from as people. But have you ever thought about interviewing a tree?

In the wake of a storm on May 19, 2017, we imagined what it would be like to interview a tree, who has called Valle Crucis home for 300 or more years. The result is this article. 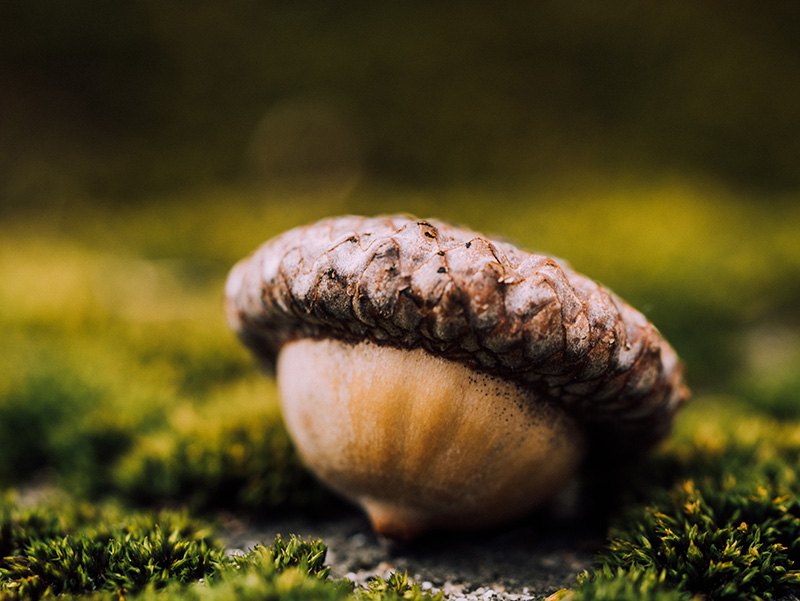 “I would love to show you some pictures from my childhood,” laughed the Big Oak, “but cameras are a pretty modern invention. You could say that I was a pretty ordinary acorn though, just like any other, really.”

When the Big Oak was just a seedling, around 1720, the area looked a lot different. “I had many brothers and cousins – other oaks, pines, maples. The big open fields weren’t quite as open as they are today. And we didn’t have this blacktop road.”

Today, visitors the rural community of Valle Crucis enjoy its quiet demeanor and bucolic setting. “Oh, it was real quiet when I was growing up. The only people I might see would be one of the natives – maybe a Cherokee or Catawba hunting party. I’ve heard tell from my older family members that there were people living here back into the last ice age.

“They traveled on foot in those days using animal trails. There were wide swaths cut by the roaming of bison that lived in this area then. If you head out Highway 194 toward Todd, I think there are places where you can see what they called the ‘Buffalo Trail.’” 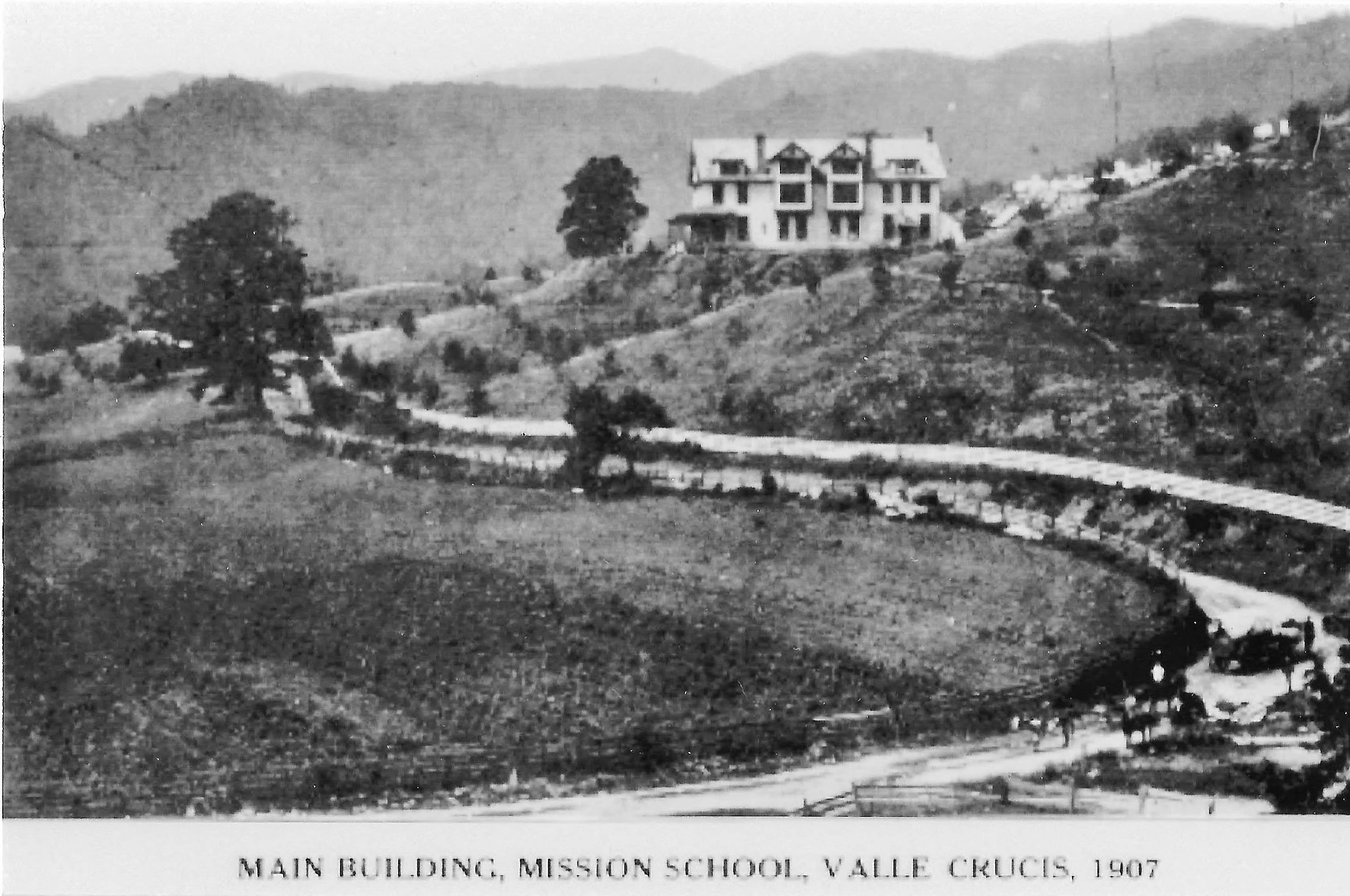 The first white men arrived in Valle Crucis around 1752, when Moravian Bishop Spangenberg visited looking for a suitable location for a large Moravian settlement. “I’ve seen his descriptions of his travels,” said the Big Oak. “I believe he claimed that had they not taken the loads from the backs of their horses, they would have fallen backwards down the mountains. They needed to take a lesson from the cattle you’ll see grazing on these hillsides. If you look closely, on one side their legs are just a little shorter.” As we looked at the Big Oak, we saw he was struggling to keep a guffaw inside. “All joking aside, natives and later, the settlers, learned a lot from the animal trails. You work your way up the mountain instead of heading straight up.”

David Hix and his family, along with the Ben Ward family, arrived in Valle Crucis in the 1770s. “That’s when lots of people were starting to head toward the west. They wanted to own land and could do it through what’s called a land grant. I was, oh, about 50 years old or so. And these United States hadn’t yet won their freedom from England.”

He said that other famous explorers during the time passed through – Andre Michaux, who was here gathering new plants for King Louis XVI, and Daniel Boone – “I’m so glad he didn’t leave a note on me about bears,” the Big Oak said referring to Boone’s legendary claim.

"You could say that I was a pretty ordinary acorn though, just like any other, really."- The Big Oak

Valle Crucis didn't actually have a name until the 1840s. A bishop, this time from the Episcopal Church, came to the mountains looking for a site for a western mission. “Bishop Ives was overwhelmed with the beauty of the mountains,” said the Big Oak. “The people were warm and welcoming. He said they didn’t have much, but they were willing to share what they had.

“Bishop Ives is the man who gave this place a name. Supposedly, he looked down where the creeks come together right yonder and saw the form of a cross rise up in the fog,” continued the Big Oak. “Now, I’d been here about 125 years by that time, and I’d never seen that happen, and I ain’t seen it since. But the name stuck, and you got to admit that it does have a nice ring.”

The Valle Crucis Mission started in earnest and became a focal point of the community. “It was so much more than a just a church,” said the Big Oak. “It was a place of learning – did you know that it was one of the first agricultural schools in this part of the state? It was a post office, and the man who ran it, Brother Skiles, well, he helped everybody.”

Some other businesses cropped up around the Mission – a wagon factory, a sawmill, and even a hydroelectric plant. “The field down here in front of me was filled with apple trees in the early 1900s, and they had an electric truck to deliver them to Elk Park. It was the darnedest thing – it took two big strappin’ men to handle the batteries in the truck.

“Let me talk for a minute about this road. This road was once called ‘the best road in all the state’ when it was built in 1892. There wasn’t any fancy equipment; it was all done with brute strength – men with shovels, wagons, oxen, mules, and horses.” 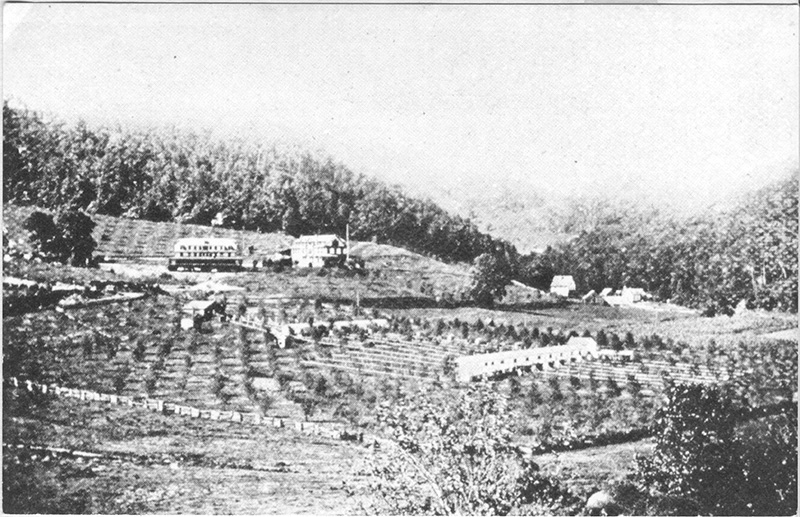 The Valle Crucis, Shawneehaw, and Elk Park Turnpike was surveyed by Shepherd Dugger and opened as a toll road connecting Valle Crucis with the railroad, known to locals as Tweetsie, over in Elk Park. "You know it took Mr. Mast two days on his wagon to get from the store over to the rail stop in Elk Park," shared the Big Oak.

“Old man Dugger is immortalized in the ‘Dugger S’ on up the road a piece. When you get there, you look full on at the Shook home place before bearing hard right then just as quickly back left. Part of the road’s been improved, but they didn’t take out the ‘S.’”

Around the turn of the 20th century, Valle Crucis was a bustling community. It had two general stores, the Mission School was in full swing, and many of the larger homes were welcoming guests from the Piedmont and coastal areas, who’d come and stay for weeks at a time. “Miss Lou (Mrs. Lou Smith Taylor) would fix a spread o’ food for her guests that was really something. I’d see some of them walking by me up the road here to settle their meals. The Taylors, Masts, and Bairds had big houses that could put up many guests.”

According to a brochure published in 1927 by the Valle Crucis Community Club, vacationists could enjoy many recreations including tennis, riding, driving, swimming, fishing, walking, mountain climbing, croquet, quoits, indoor games, and music. “The Mission School would make ice cream, too,” shared the Big Oak with a longing look.

“I’ve seen many firsts,” said the Big Oak, “the first car, the first European settler, but perhaps the scariest and most amazing first I’ve seen was the first airplane. A plane flew over the valley around dinner time the first part of September in 1925. I was around 208 years old then. It kinda made me think about the turkey vultures that sometimes perch on my branches to dry their wings in the morning sun, but it was a lot louder.” 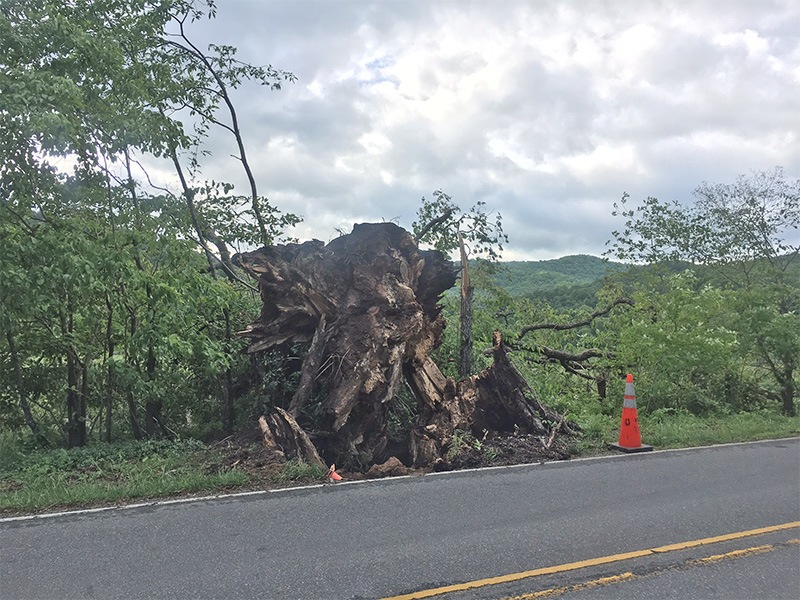 The 20th century was a period of big changes everywhere, not just here in Valle Crucis. The whole economy of the nation changed. Farmers found work in town; travel became more accessible; leisure pursuits were different. “This field in front of me where apple trees used to be and milk cows were pastured is now a destination. After the hay’s cut in the fall, they start getting ready for thousands of cars and people to gather here for the Valle Country Fair. People come from all over; from far away places like Boone and Wilkesboro and even from other states.

“People love to come up to see all of the leaf color. Sometimes I wish my leaves were more showy, but I reckon I just have to be satisfied with holding on to mine a little longer than my maple cousins…they really put on the dog,” the Big Oak said with a grin. 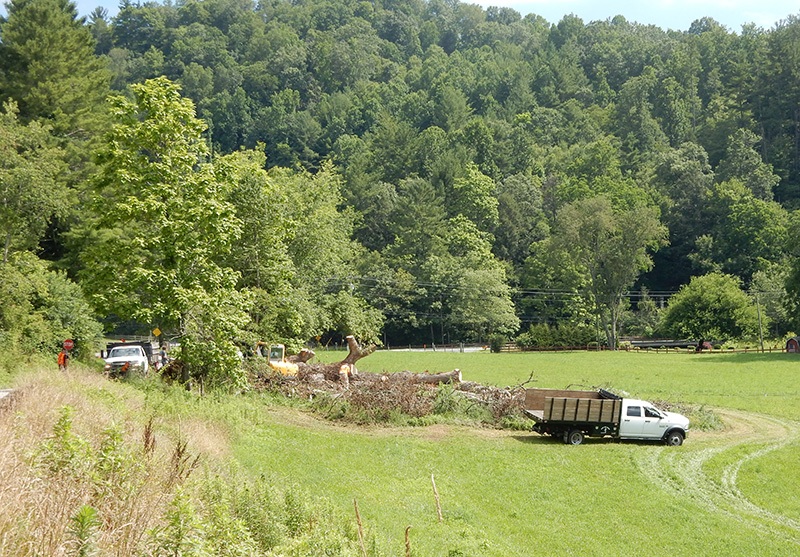 That brings us back to the road. Highway 194 headed up the Valle Mountain was improved by the highway department in the early 2000s to make it safer for the residents and visitors who travel it on a regular basis. Some places were widened, and some curves were “straightened.”

“The road project was a scary time for me,” said the Big Oak. “The road people wanted to make a big change right here, and the plans called for me to be taken down.”

Residents of Valle Crucis and employees at the Valle Crucis Conference Center fought hard for the Big Oak. He had seen a lot and deserved to live out his days without care and concern. The highway department eventually relented and changed the plans to accommodate our friend.

“I was touched. So many people spoke up for me when I couldn’t speak out for myself,” said the Big Oak. “I guess it was meant to be.” 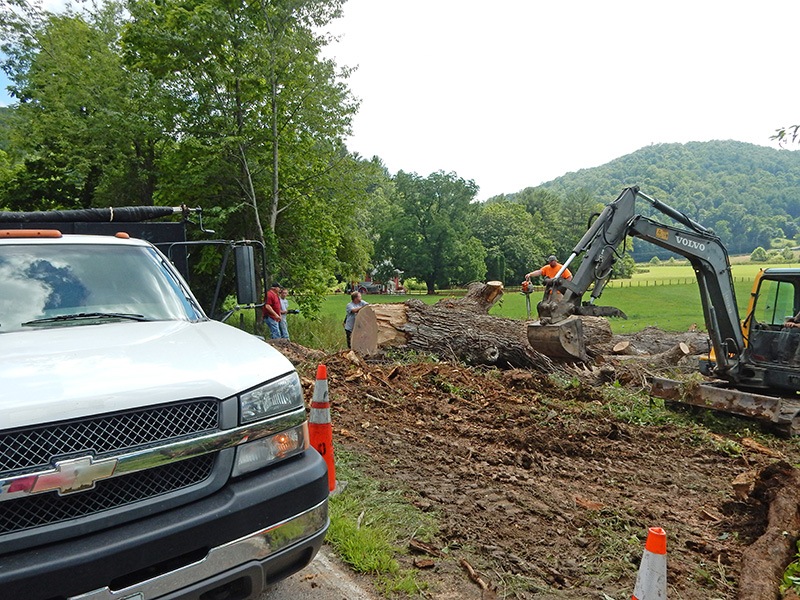 During a wind and rain storm on May 19, 2017, the Big Oak finally met his demise. Age and ill effects on his roots from the moving of the road were contributing factors. Community members were saddened by the loss. One long-time resident said that her grandfather’s grandfather had talked about the Big Oak. This silent observer of life in this little valley had a greater impact on its residents than he or we realized. Even with two hearts (the Big Oak was actually two trees that had grown together), he ultimately couldn’t weather the test of time.

Of course, some artistic license was taken with our interview. We don’t know for sure if Daniel Boone or Andre Michaux were ever in Valle Crucis, but we don’t know that they weren’t either. Much of our research was from A History of Watauga County North Carolina by John Preston Arthur, Valle Crucis: A History of an Uncommon Place by I. Harding Hughes, Jr. and personal knowledge from local residents. Many thanks to the nice folks at the Valle Crucis Conference Center for sharing some old photos with us. They show the tree when it was around 200 years old. One more mention, we appreciate Anthony and Terry, here at the store, who counted the growth rings to find at least 292 growing seasons.