A Sweet Holiday is on the Horizon 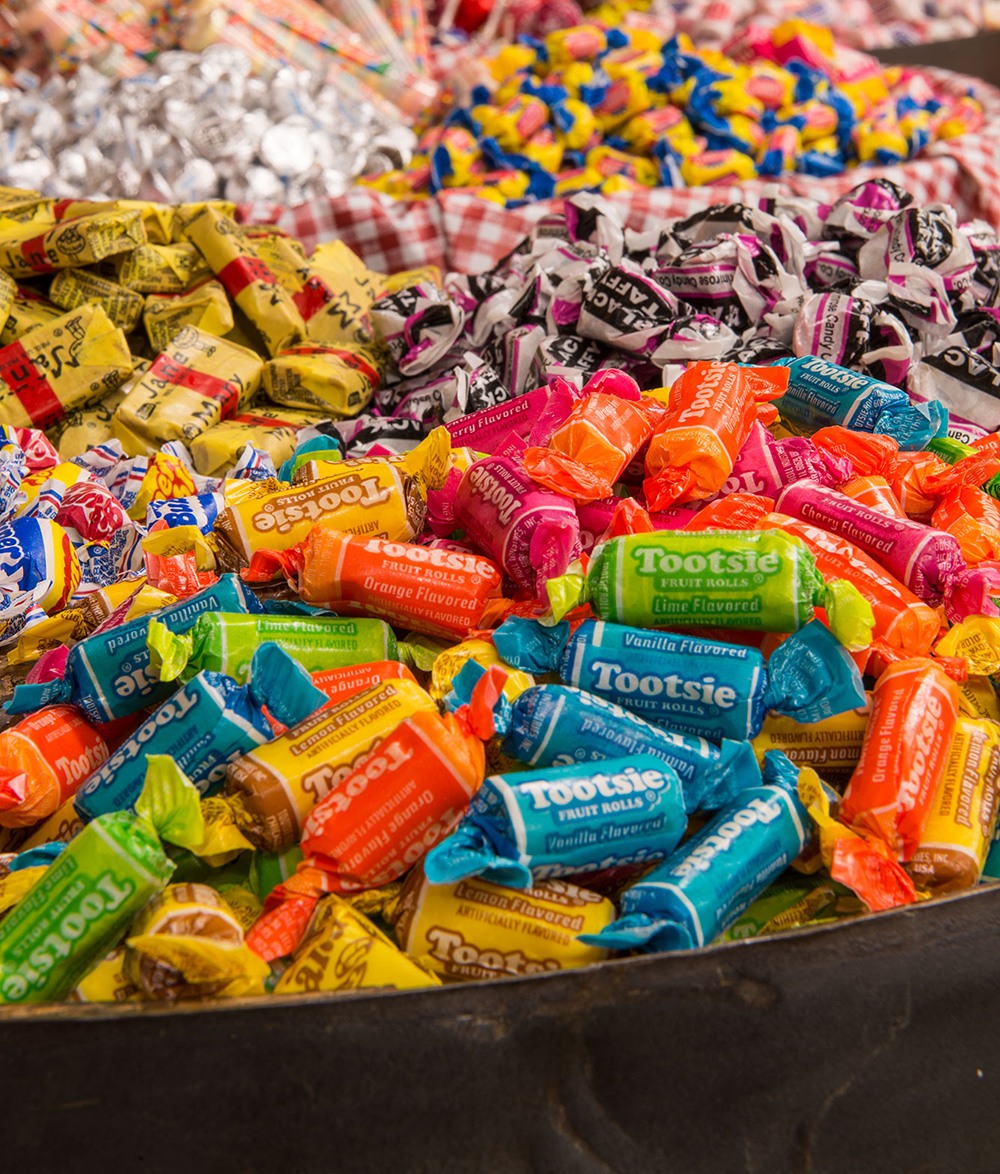 Next to Halloween, Valentine’s Day is probably the next sweetest day for candy. Americans have a penchant for candy. According to the US Census Bureau, more than 1,850 establishments manufactured chocolate and other confectionary products in 2014. From chocolate bars to licorice, the average American eats around 22 pounds of candy each year. But, do you know the story behind your favorite sweets?

We’ll start at the beginning. If you were looking for candy in the mid 1800s, you wouldn’t seek out a confectionery shoppe, you’d likely head to the local pharmacy. Think about one of Mary Poppins’ favorite songs – a spoonful of sugar makes the medicine go down – pharmacists would recommend that sugar be added to the mix of herbs and teas to get children (OK, and adults) to take their healing concoctions.

In 1847, Oliver Chase invented the first American candy machine, which was a lozenge cutter. His first lozenges were sold to soothe the throat and stomach. You might be familiar with these lozenges today; they go by NECCO Wafers and are made by the New England Confectionery Company, which Oliver and his brother Silas founded as Chase and Co.

NECCO Wafers are a well-traveled candy. They were given to Inuit children by Donald MacMillan in 1913 when he was exploring the Arctic. Admiral Byrd requisitioned 2.5 tons for his expedition to Antarctica in the 1930s. Some believe that Union soldiers carried them in their knapsacks, but we know the United States government sent large shipments to soldiers in World War II because they were easy to ship and didn’t experience much breakage.

Tootsie Roll is a favorite – it would have to be since 64 million of these tasty chocolate morsels are made each day. The story behind the candy is just as interesting. Turn back the clock to 1884 when Leo Hirschfeld, an immigrant from Austria, gets off a ship in the New York Harbor. His father’s business was candy, and he set up his own small shop and sold sweets to the neighborhood children. Not long afterward, he went to work for a company called Stern & Saalberg. During his time there, he invented several machines that would make mass production of candies easier and faster. His patents included a fork to dip bonbons and a machine for putting confectionery into molds.

The patent for the unique candy-making technique for what would become Tootsie Rolls was issued in 1908, which is the same year that Tootsie became associated with the candy. The name was eventually trademarked in 1909. So, who is the mysterious Tootsie for whom the candy is named? All Tootsie Roll stories say the name comes from Clara, Leo’s daughter. Her nickname was Tootsie, but that is not the first time the name was used. A cute little girl just oozing with mischief appeared on a small booklet advertising Bromangelon, a magical powder similar to today’s Jell-O. The booklet was called Tattling Tootsie.

Here’s a Southern staple – the Goo Goo Cluster. Made in 1912 in Nashville, Tennessee, the Goo Goo cluster was the world’s first combination candy bar. A tasty concoction of caramel, marshmallow nougat, fresh roasted peanuts, and milk chocolate, the cluster was also an out-of-the-box shape, which presented some issues with wrapping. How do you wrap something that isn’t square or rectangular? When the candy first hit the streets, it was hand dipped and displayed under glass at local drug store candy counters. Then, ladies would hand-wrap each one in tin foil. Eventually, an automated process sped up wrapping to maintain a rate of 20,000 Goo Goo Clusters an hour.

How did the Goo Goo Cluster get its name, well, that’s another story, maybe several. Howard Campbell, Jr., the man whose father invented the candy, says that his dad rode a streetcar every day and would discuss the name situation with other riders. One day he shared the news about the birth of his son. A schoolteacher made the connection with the Goo Goo name and said that the candy is so good that a baby can ask for it from birth. 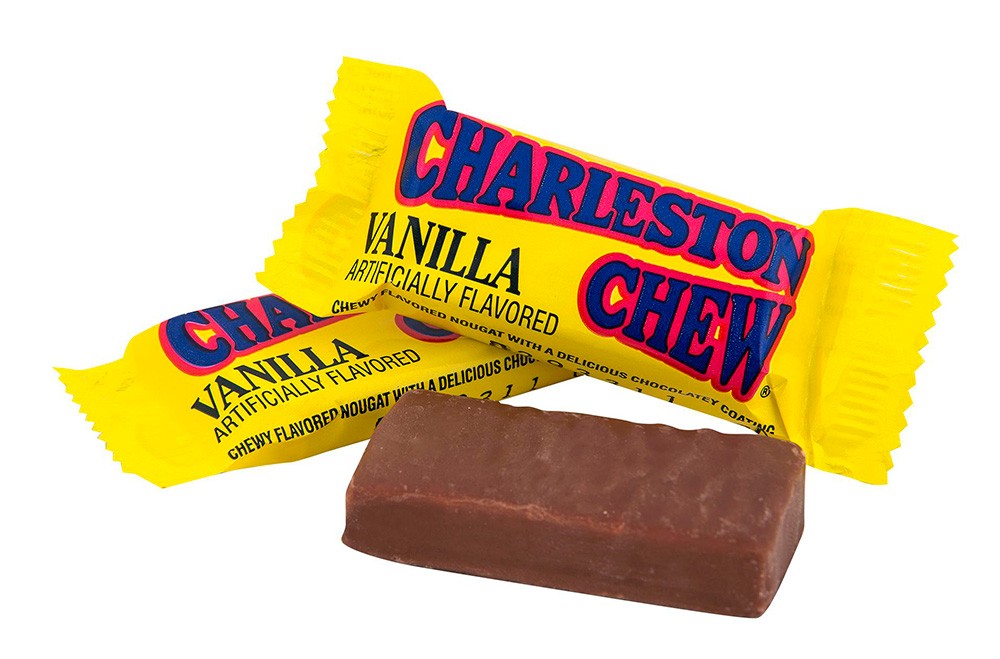 Sometimes candies seek to gain popularity by naming themselves after events, people, or even dances. The Charleston Chew was invented in 1922, just as the scandalous dance, The Charleston, was sweeping the nation. Made of vanilla-flavored nougat covered in milk chocolate, the Charleston Chew was one of the first candy bars to encourage customers to use their own home refrigerators to freeze the bar. Chew lovers will swear by the “Charleston Crack,” which is freezing the bar then slapping it on a hard surface to create several pieces.

Otto Schnering started the Curtiss Candy Company in 1916. One of its first products was the Kandy Kake, which featured a pastry center topped with nuts and covered in milk chocolate. Sales for the Kandy Kake were OK, but when Schnering reintroduced it in 1921 as a log-shaped bar made of caramel and peanuts then covered with milk chocolate, it was a homerun, so to speak. The new candy bar was called Baby Ruth. If you have even a passing interest in baseball, you know that there was a baseball player with a nickname that sounded similar, and this player was piling up the homeruns in 1921 and had his name in the newspaper more than the president of the United States.

Even so, the company claimed that candy bar was named after “baby” Ruth Cleveland, the daughter of President Grover Cleveland (1885-1889, 1893-1897). Ruth was Cleveland’s first born daughter (1891). She passed away from diphtheria in 1904, 17 years before the introduction of the candy bar. The Curtiss Company stood behind this claim and even took the Sultan of Swat, Babe Ruth, to court to keep him from having his own name on a candy bar saying that it infringed upon their popularity. 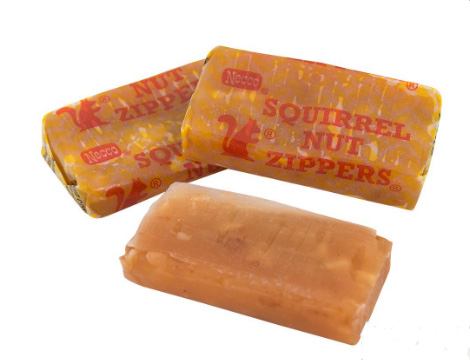 Have you heard of Squirrel Nut Zippers? No, not the popular retro-swing band, it’s way before that. The Squirrel Brand dates back to the 1890s, but the Nut Zipper didn’t come about until the 1930s. So, when you whip up a new candy with roasted and salted peanuts and caramel, where do you find a name? Maybe the newspaper. Legend has it that these candies were named for a Prohibition-era illegal drink – a Vermont man blamed his crazy behavior on some local moonshine he referred to as “that dang nut zipper.”

Now, that was a sweet history lesson. You may want to read more. Some of the information we researched was from the Candy Professor. We hope you enjoy your sweet research as much as we did.