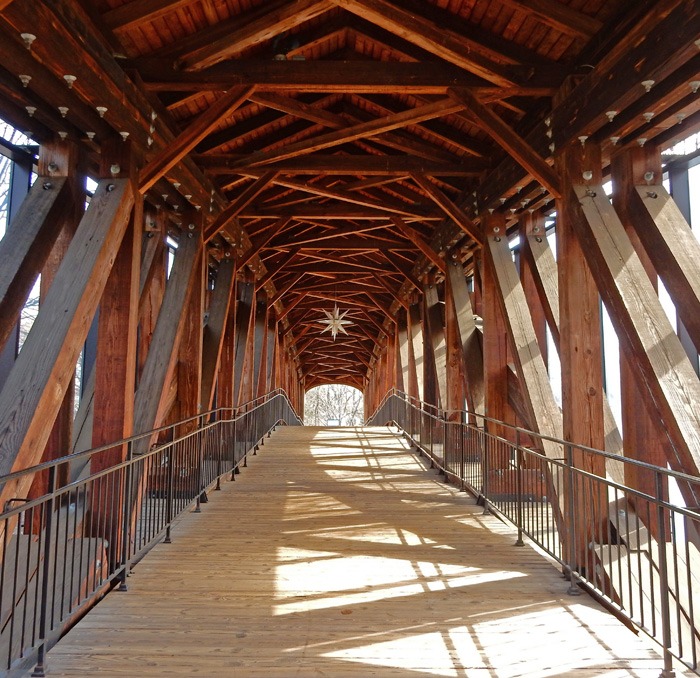 The city of Winston-Salem is reinventing itself daily. From being a tobacco and textile mecca, the city is now a haven of arts and innovation. Many of the old tobacco factories are being reclaimed and transformed into medical research laboratories, technology hubs, and apartments for people wanting to live amongst the re-emerging downtown vibe. But what if you’re not ready to take the deep dive and move to Winston-Salem? We have recommendations on must stops for spending 24 hours in Camel City that are just a short walk or drive from the front door of the Mast Store. 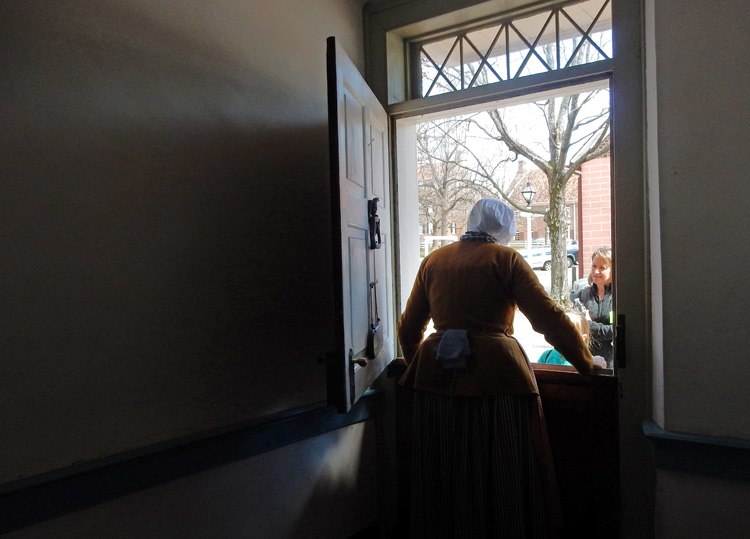 Let’s start the day at the city’s roots – Old Salem! The Moravians first settled the Wachovia Tract in 1753 in nearby Bethabara. In 1766, Salem was established as the administrative center of the settlement. It was a vibrant town filled with entrepreneurs including potters, furniture makers, weavers, and brick makers. There was a flour mill, a tannery, a brewery, and most any other undertaking necessary for being a self-sufficient settlement. Today, on your quiet walk through history, you can catch a glimpse of the past come to life along the cobblestone sidewalks of this national treasure. 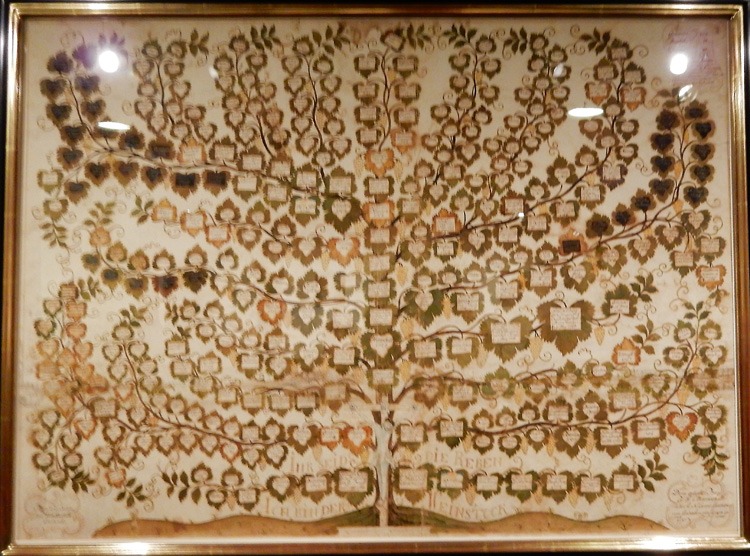 MESDA, or the Museum of Early Southern Decorative Arts, is a good starting spot for your tour. We spent a lot of time in one of the newest galleries featuring items that were made in Salem. One of the most fascinating objects is immediately to your left as you enter the main gallery downstairs. At first glance, it looks like a family tree, but upon further examination, you’ll see that it is a tree of all the Moravian Churches from the late 1700s. It includes the one in Old Salem and many in African locales. 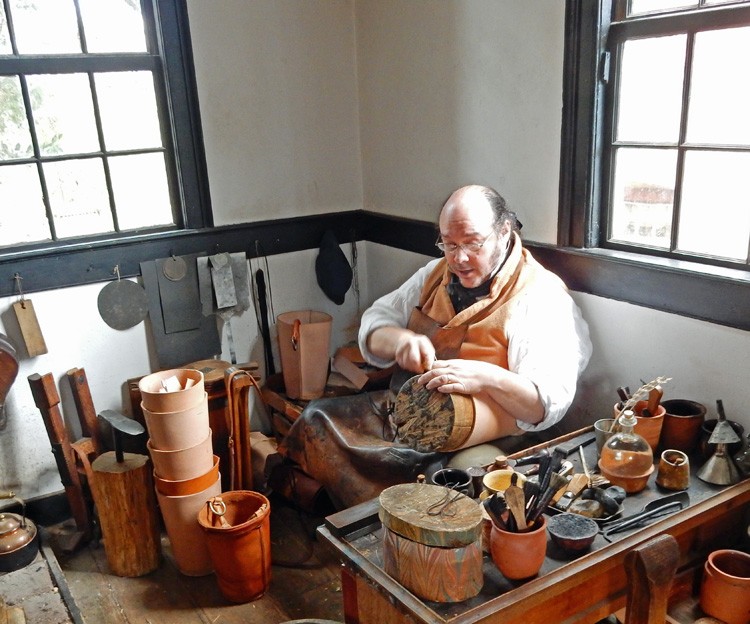 When we visited, we stopped in at the Shoemaker’s Workshop. It was built by Samuel Schultz in 1827 and is well-stocked with shoe lasts (the items used to form the shape of shoes), leather, and even a few completed shoes. Be sure to bring questions with you! The interpreters love to share information about what was happening during the time they are representing. The day we visited, we discussed high-heeled shoes…for men. In the late 1700s and early 1800s, high heels for men was a trend. As we found out, the higher the heel, the harder it was to maintain balance, so one answer was to make the shoes straight (not curved or fitted for your right or left foot). Of course, that is speculation, but something interesting to think about.

Wherever you look in Old Salem, you’ll see an iconic image of a coffee pot. To see it in real life, head up to the intersection of Main Street and Old Salem Road. It’s not in its original location, but it now marks the northern end of the historic district. It was used by the Mickey Brothers to advertise their tinsmithing business in 1858. Rumors abound of its uses including that it was used to serve coffee for Love Feasts. Thankfully, we don’t believe that one is founded in any truth. 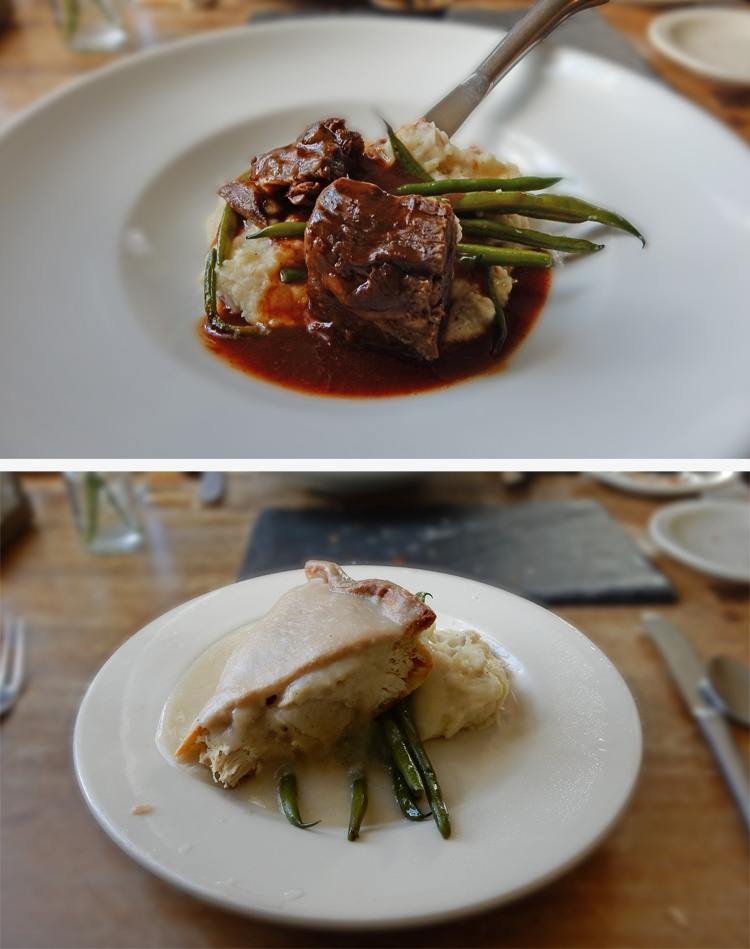 If you’ve worked up an appetite visiting the many historic stops, drop by the Salem Tavern. They serve lunch and supper every day except Monday (brunch on Sundays). The menu is inspired by food commonly found in Salem during the 1800s. You’ll also notice the furniture – the tables and chairs are simple designs that may have been used with “strangers” visiting the community would have dined on. We enjoyed Moravian Chicken Pie and Roast Beef during our visit. The meals were hearty and tasty. Unfortunately, we didn’t get to try their specialty dessert, the Syllabub, but it sure did sound (and look) good. The table next to ours did encourage us to try it on our next trip. It was a popular drink in England in the mid 1500s and was re-introduced in Old Salem by one of its bakers. It features white wine, dry white sherry, lemon zest, lemon juice, sugar, heavy cream, and fresh seasonal berries.

The area of the city where the Mast Store is located is called the Downtown Arts District. The Downtown Arts District Association, which uses the association with Dada(ism) – an avant garde art movement in the early 1900s – to its advantage, is a group of artists, working studios, shops, galleries, restaurants, and more that cultivated the arts as a means of economic growth in Winston-Salem’s early days of re-emergence. That rebirth is celebrated on the First Friday of every month with a Gallery Hop complete with exhibit openings, music, dance, food, and more. 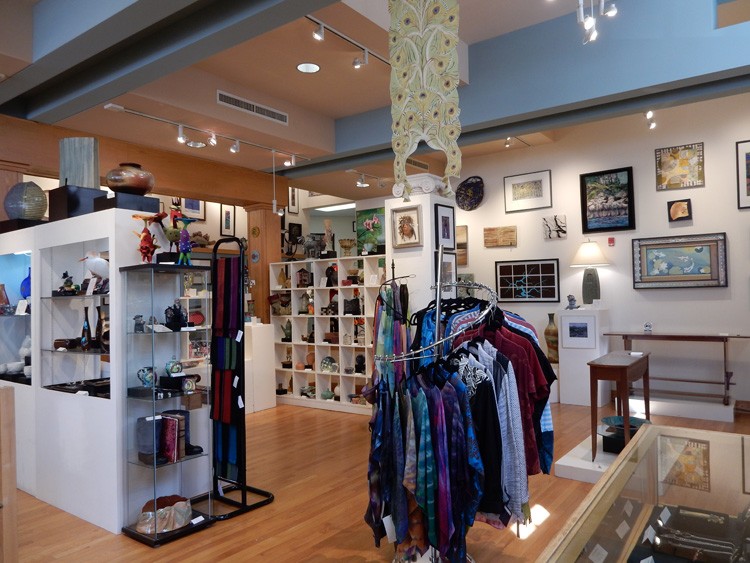 Just a hop, skip, and a jump down Trade Street is the Piedmont Craftsmen Gallery. Formed in 1963, Piedmont Craftsmen represents almost 400 artists from all across the country. Works from contemporary and traditional artists are displayed side by side in a beautifully open and light area. Three of the original founding artists still actively display, and new artists are juried in by a panel of their peers as well as collectors. Creative connections is what the gallery is all about.  If you see a work you like, but the colors aren’t right for your display area, just ask. One of the aspects we especially love about Piedmont Craftsmen is their outreach in the community. One of their partnerships is with Forsyth County Habitat for Humanity. Future homeowners explore the idea of home as a sanctuary in Hand, Home, HeART because a home should not only be functional, it should be beautiful. These classes are led by members of Piedmont Craftsmen and other Winston-Salem artists and allow adults and teens to make art for their new homes. 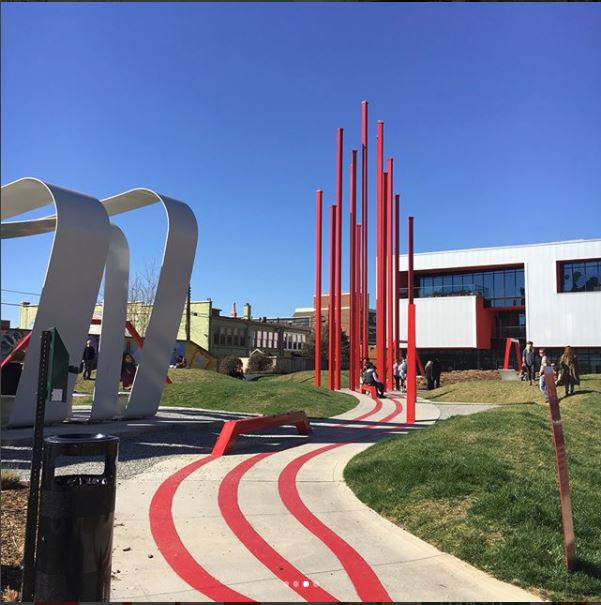 If you want to experience art every day, stop by the Artivity Park. It’s part park and part art installation. Located on Liberty Street between 6th and 7th Streets, the Park has places to sit and enjoy a sunny day or to admire works by local artists. The tall red features at the center of the Park are reminiscent of smokestacks that used to be a part of the Winston-Salem skyline. On warm days, these emit a cooling mist. The murals are temporary works that are replaced annually. This year’s mural painting event is scheduled for the first Saturday in May. 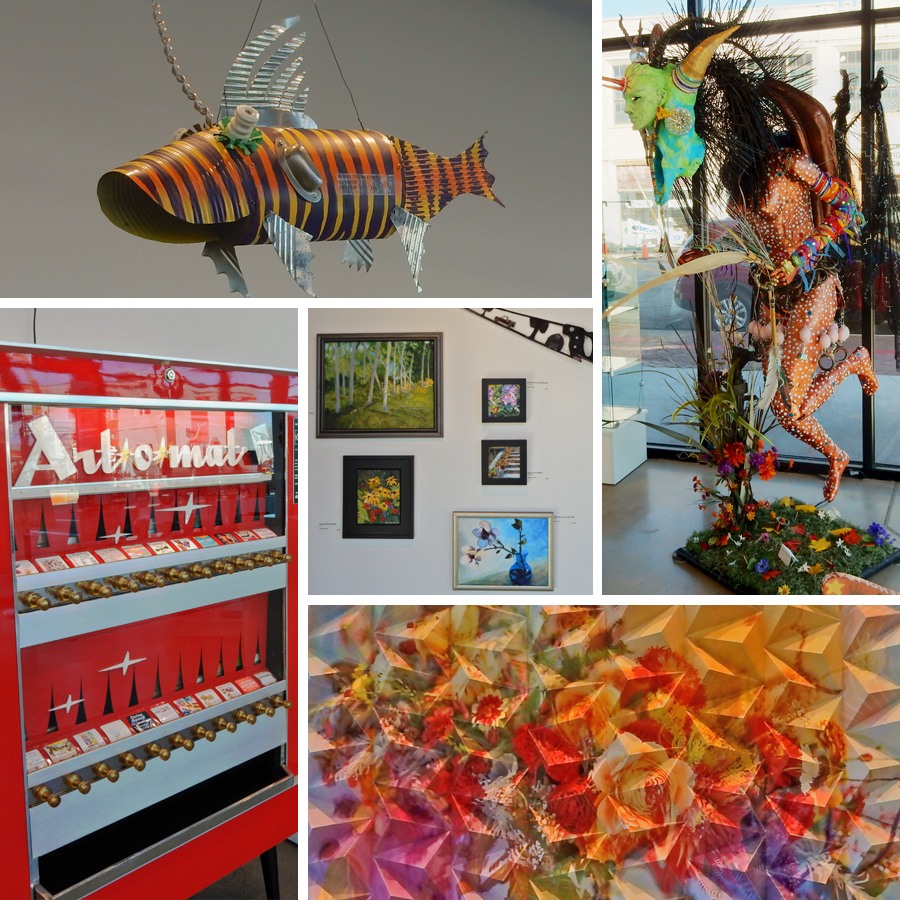 Right next door is the Red Dog Gallery, which is a part of the Art for Art’s Sake Group. The gallery showcases a group of local artists who exhibit their talents in a multitude of media. From jewelry to Southern folk art and classic Raku pottery to whimsical sculptures, you’ll find it all here. Be sure to check out the offering at the Art-O-Mat. If you are of a certain age, you’re sure to recognize it as a cigarette machine, except now it vends pieces of art instead of packs of smokes. 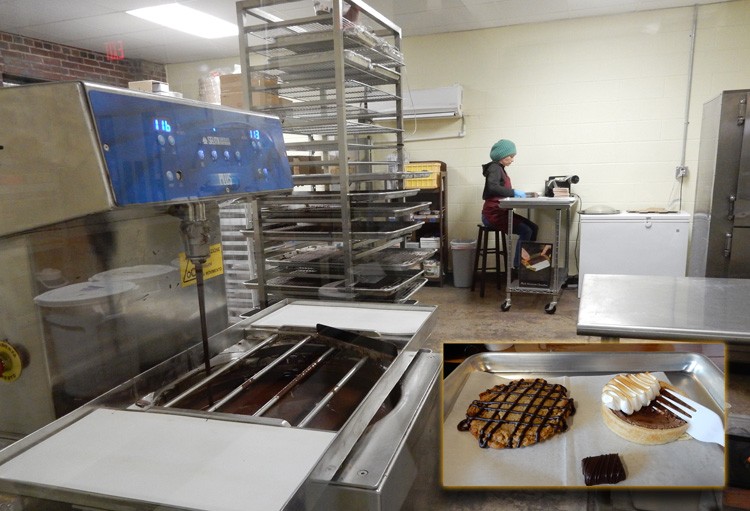 Just up the street a short walk is Black Mountain Chocolate. First, you can’t go wrong with chocolate, right? So, you won’t be disappointed with a stop here. Production began in 2007 in Black Mountain, NC, but demand soon necessitated a move to a larger venue. The current location has been crafting artisan chocolates, including bars and truffles, since 2015. Cocoa beans from a single source are roasted in-house, which leads to their unique, rich chocolate taste. You can actually watch the entire process through viewing windows when you visit, and if you want to know more, on selected Saturdays, you can participate in a tour, where you’ll become a more discerning fan of chocolate. During our visit, we enjoyed a Bear, which is a collection that includes a tart, a truffle, and a cookie, along with something to drink (choose from coffee, drinking chocolate, or Chai). The Bear is big enough – and rich enough – to share. 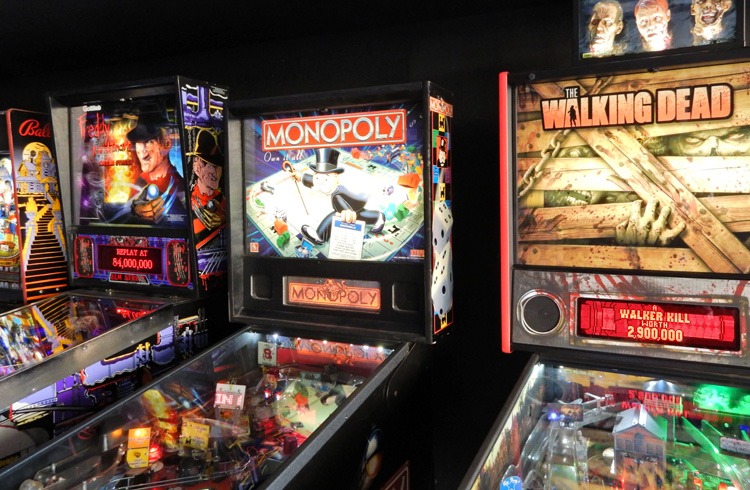 If you are looking for a little more time travel, how about heading back to the ‘80s? Just around the corner is Reboot, an arcade bar featuring your favorite pinball and arcade games like Pac-Man, Asteroids, and Dig-Dug. There’s even a couple of Skee Ball lanes in the back. Anyone is welcome on Saturdays and Sundays from noon until 6 p.m., if accompanied by an adult, but evenings are reserved for those over 21. Don’t be surprised if you’re asked to become a member – don’t worry, there’s no charge, just provide a little information be a part of the club. Watch their Facebook page for upcoming events – like the Ready Player One tournament coming up on March 25 - for the next time you’re in town.

We feel like we just scratched the surface here in Winston-Salem. That means there’s a lot for you to uncover on your next visit. Be sure to check out the rest of our 24 Hours in series, which currently includes Asheville, Waynesville, Knoxville, Greenville, Hendersonville, and Valle Crucis.