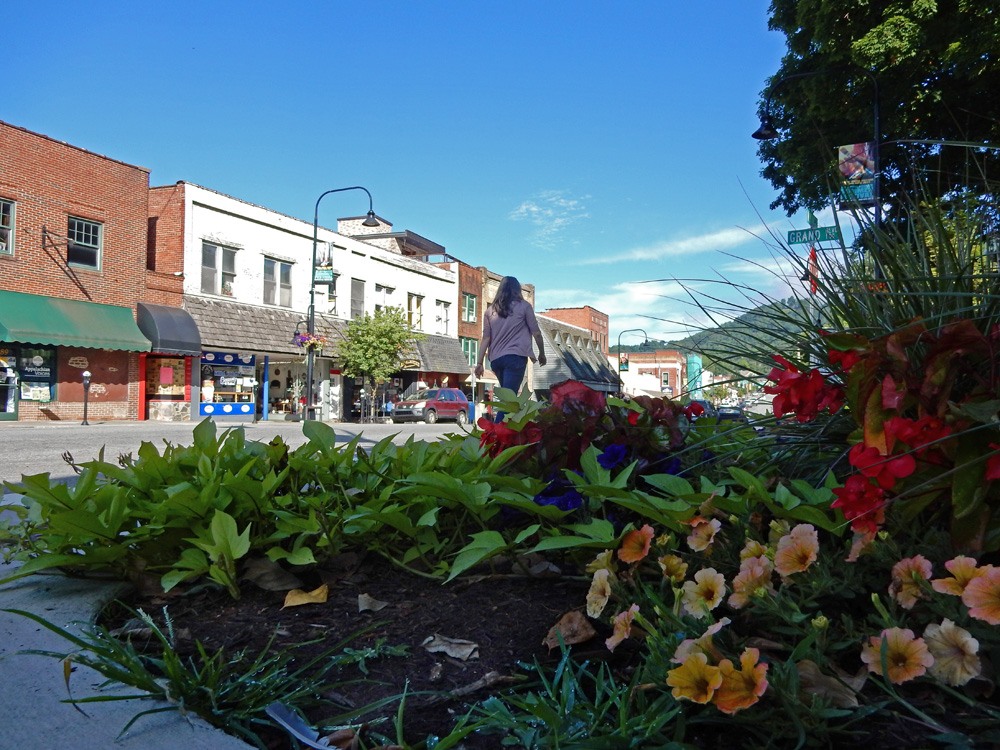 The mayor of Banner Elk proclaimed on the day the East Tennessee and Western North Carolina Railroad completed its route to Boone, “I can remember when the only way a person could get to Boone was to be born there.” Some 100 years later, it seems that this mountain town is a popular destination for people seeking an escape from the heat, an outdoor adventure that rivals any in the country, or a cultural experience in local Americana music. If you can only spend 24 hours in Boone, here are some recommendations that are right outside the front door of the Mast Store. 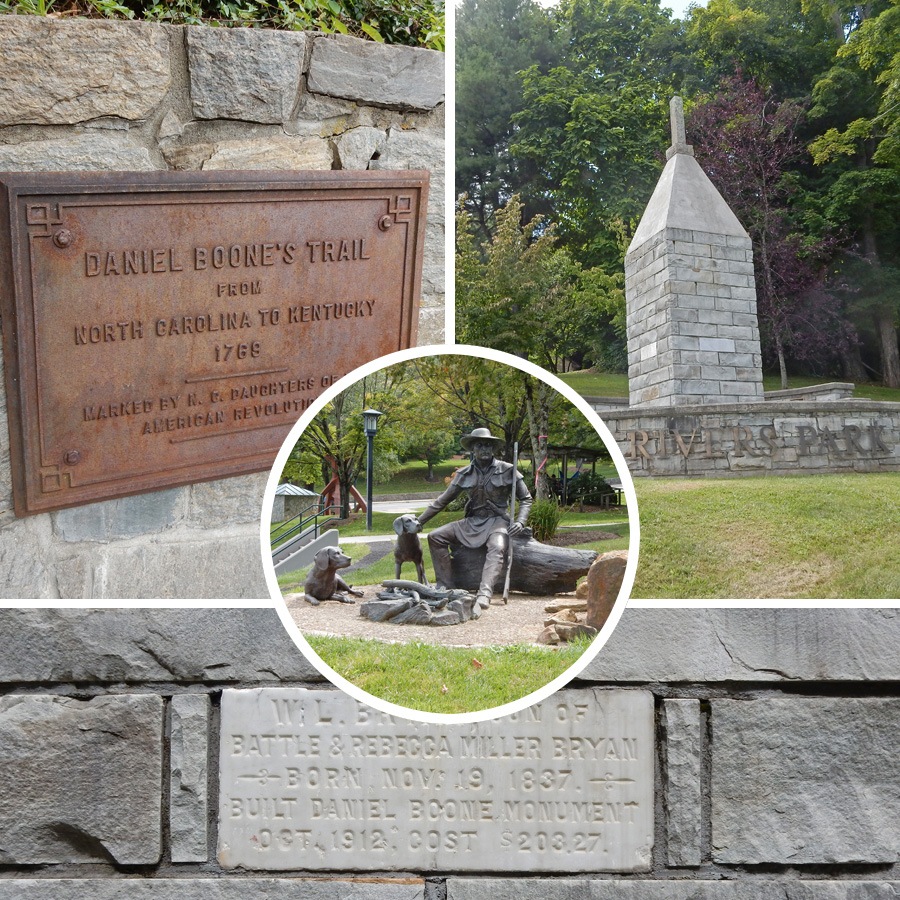 Boone gets its name from Daniel Boone, who, according to tradition, maintained, along with his fellow hunters, a series of cabins in the area that provided shelter for them when they were hunting here. Meat Camp, a small community outside of Boone, draws its name from one of those cabins where hunters would leave a little jerky for the ones who would follow. You’ll see many monuments to the explorer throughout town including a monument originally built by a former Boone mayor from the stones of the chimney of one of these cabins. It is located in Rivers Park – its third location (originally, it was beside the Duck Pond on the Appalachian State University campus, then moved to the front of Justice Dorm, and now a more permanent home). In front of the Watauga County Courthouse, near the flagpole, is a Daniel Boone Trail Marker. Placed by the Daughters of the American Revolution, these markers cover Boone’s trail from the Piedmont of North Carolina through the Cumberland Gap into Kentucky. 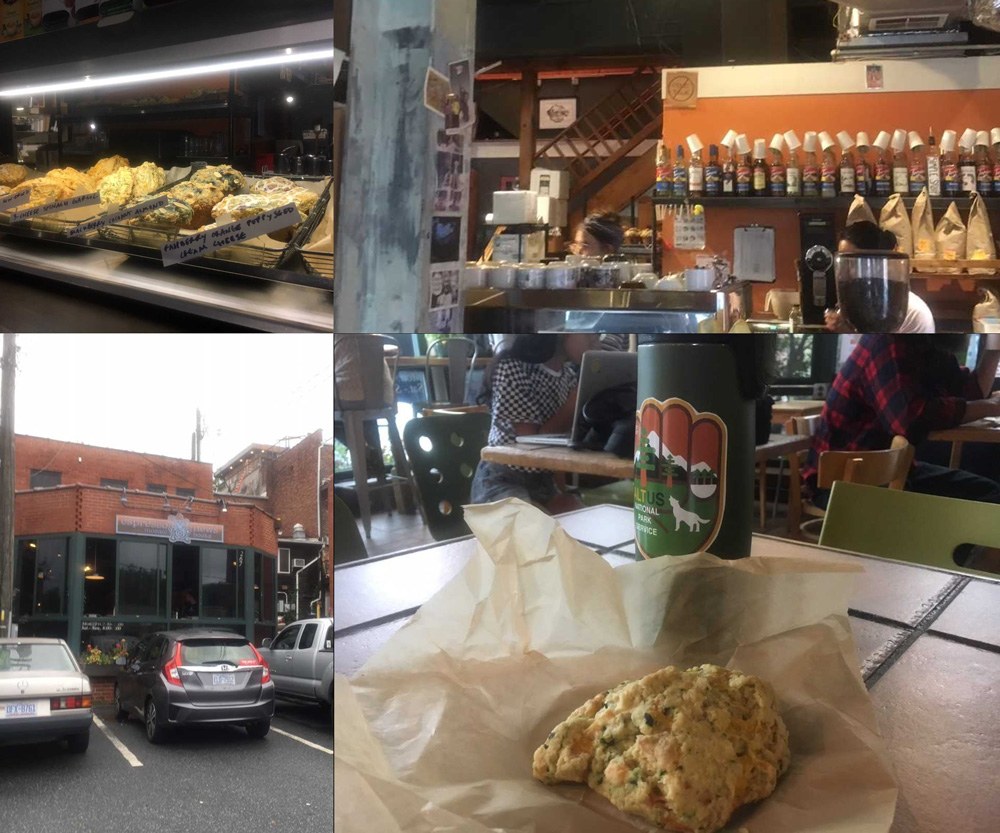 Who can start your day without a fine cup of coffee? We don’t see too many hands out there. Tucked away at 267 Howard Street in a building that once housed part of a car dealership is Espresso News. One of Boone’s oldest coffee shops, it is a welcoming place for students, locals, professors, and anyone in search of a good cup of coffee (or a good book). You must try the scones, too. We enjoyed a steaming cup of Sumatra with a spinach, cheese, and garlic scone most recently. Neither disappointed.

Since it might be a little while before other businesses open, take a walk around the corner to the post office. Surely you’ve picked up a postcard you can drop in the mail to make your co-workers jealous! Prominently positioned on King Street, the Downtown Station of the USPS is a building constructed by the Works Progress Administration. It was completed in 1940. It was placed on the National Register of Historic Places in the 1996 and underwent extensive renovation in the early 2010s. Inside it maintains its historic brass boxes and friendly service, even if it does sport a modern return slot for your Netflix movies. 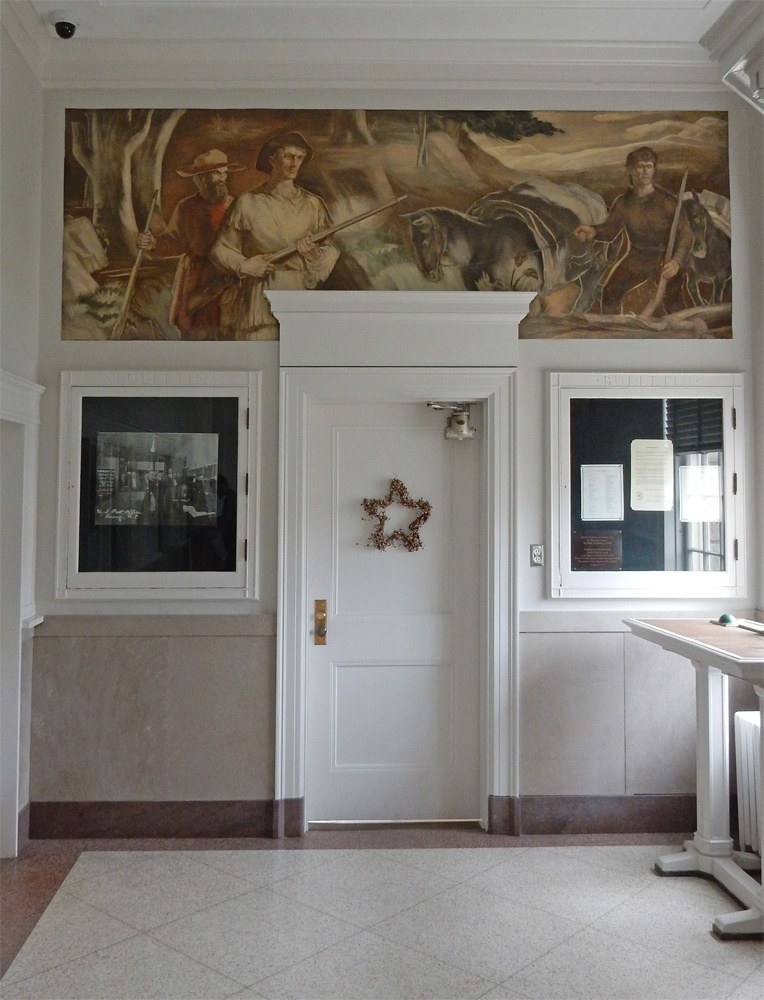 Mailing a postcard isn’t the only reason we sent you to the post office. If you look to your right when you enter the front door, you’ll see a mural depicting the town’s namesake, Daniel Boone. The mural, painted by Alan Tompkins for the sum of $740, shows the intrepid adventurer in his broad-brimmed hat and is the only surviving mural in post offices from the New Deal era that survives in the northwest part of the state.

Another stalwart in downtown is Watsonatta Western Wear, which is right across the street from the post office. When you open the door, the smell of tanned leather tells you you’re in the right place if you are looking for anything cowboy. Most days you’ll find the owner, Darrel Watson, at the front counter. From blue jeans to boots, fringed coats to boots, hats to boots – did we say Watsonatta has boots? You’ll find cowboy and cowboy-style work boots from such famous makers as Laredo, Justin, and Ariat. It is truly a-MAZE-ing what you’ll find at this store.

After a little shopping, you might be tempted to test your wits. Try the Mysterium. Gather up five of your closest friends (we hope they are puzzlers or like to solve mysteries) and sign up for one of the escape rooms. It typically takes about an hour and you’ll be locked in a room. Your wits and the clues that are fed to you are your escape route. 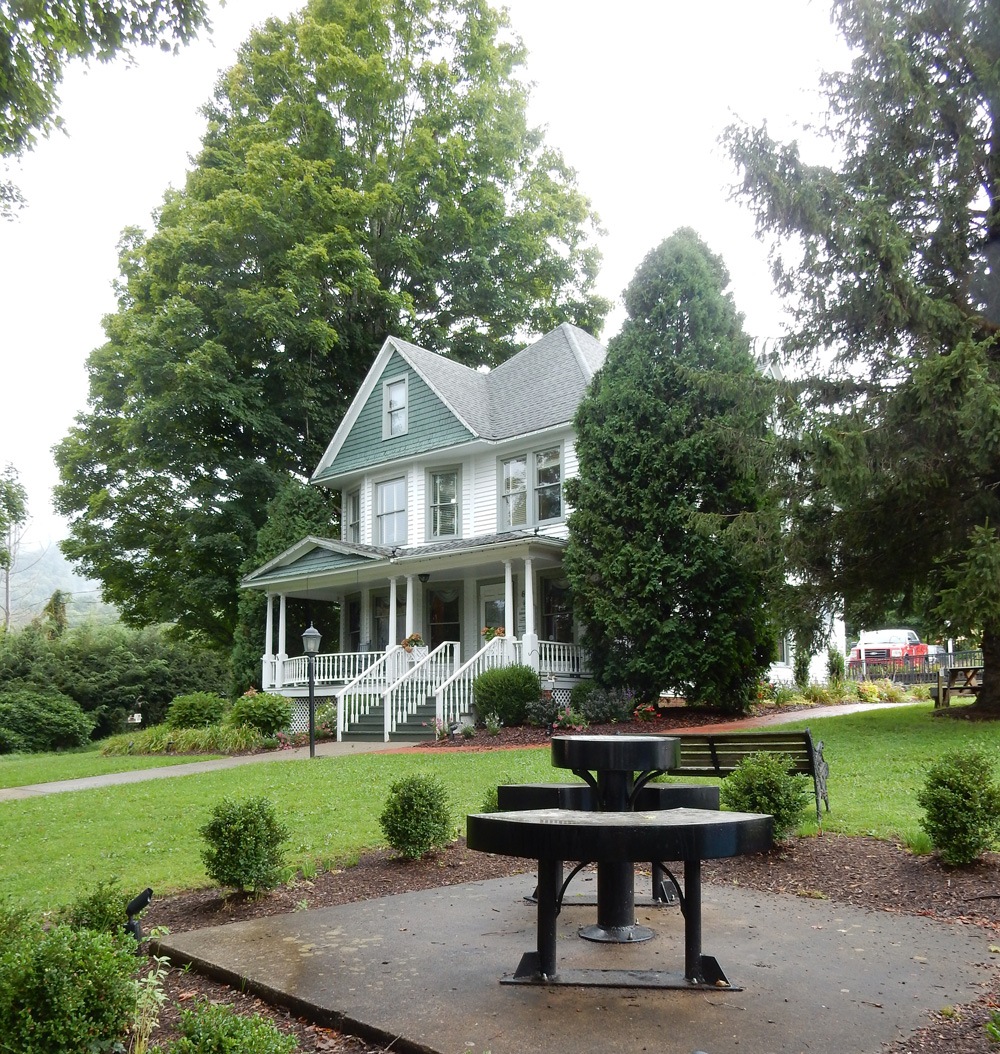 Headed back up the street, cross over to the Jones House Community Center. Built in 1908 as a home for one of the area’s first doctors, the Jones House now houses galleries featuring local artists and groups and the Watauga County branch of the Junior Appalachian Musicians, which teaches children to play and dance to traditional old-time and bluegrass music. Several young musicians, who got their start through the JAM program, are making a name for themselves – like Strictly Strings.

If you come on Thursday night, year round, bring your instrument to the Jones House and sit in for an old-fashioned jam session. Even if you don’t play, you can enjoy this mountain tradition where seasoned musicians and those just learning their instruments enjoy each other’s company. The front porch is home to Music on the Lawn on Fridays during the warmer months. These free concerts feature mostly Americana music – including a salute to native son Doc Watson in the month of June – but changes it up from time to time to include rock and other genres. You can find a schedule of the season's remaining concerts HERE. 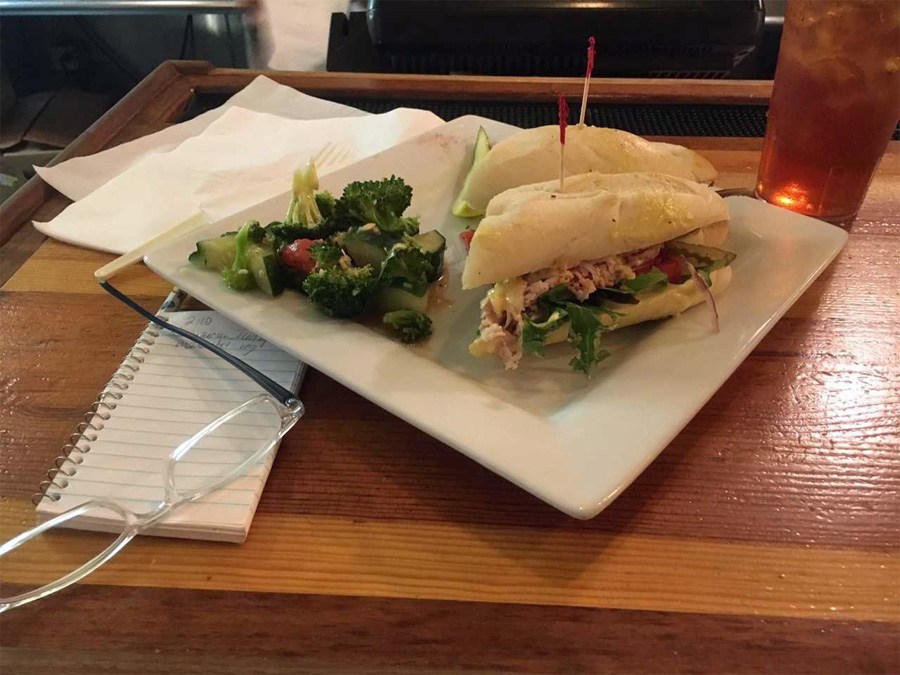 It’s probably getting to be dinner time. There are so many great options for lunch it’s hard to decide where to go. We chose Our Daily Bread. You can choose to sit at the bar in the back, booths all along the walls, or, if you’re lucky enough, you can sit in the window and watch the day unfold on the street. Soups, sandwiches, and light fare are the order of the day. They team up with Benchmark Provisions, also located downtown, for a wide selection of beers and wines. We enjoyed a Jamaican Turkey Sub with a side of marinade vegetables for lunch. Be sure to check out their daily specials. 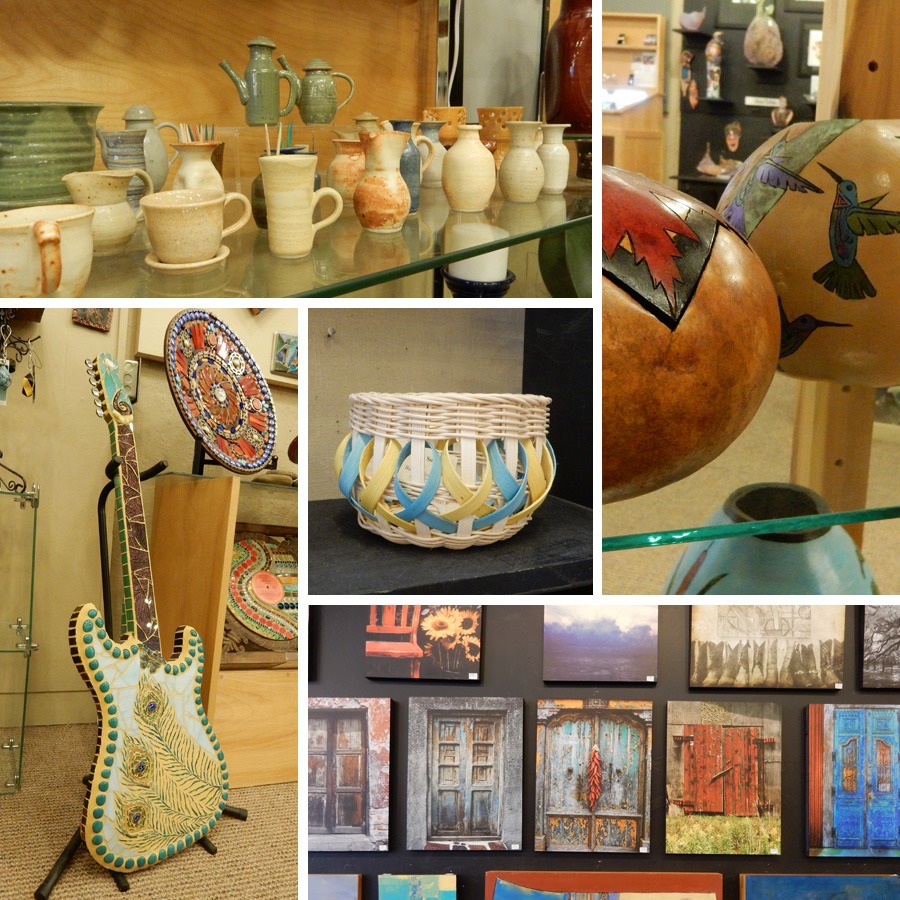 OK, time for a little walking! Stop in at Hands Craft Gallery. This cooperative of craftspeople has been in business since 1975, and when you walk in, you’re likely interacting with one of those whose work you are seeing. Each artisan is asked to staff the gallery as a part of their membership. Pottery, multimedia art, photography, jewelry, textiles, and more are displayed within, and the work is truly local, with all artists being within a 50-mile radius. On First Friday, the gallery is open late and hosts one of its artists for an interaction or demonstration. This is a great place to stop in for a local souvenir that is beautiful and functional. 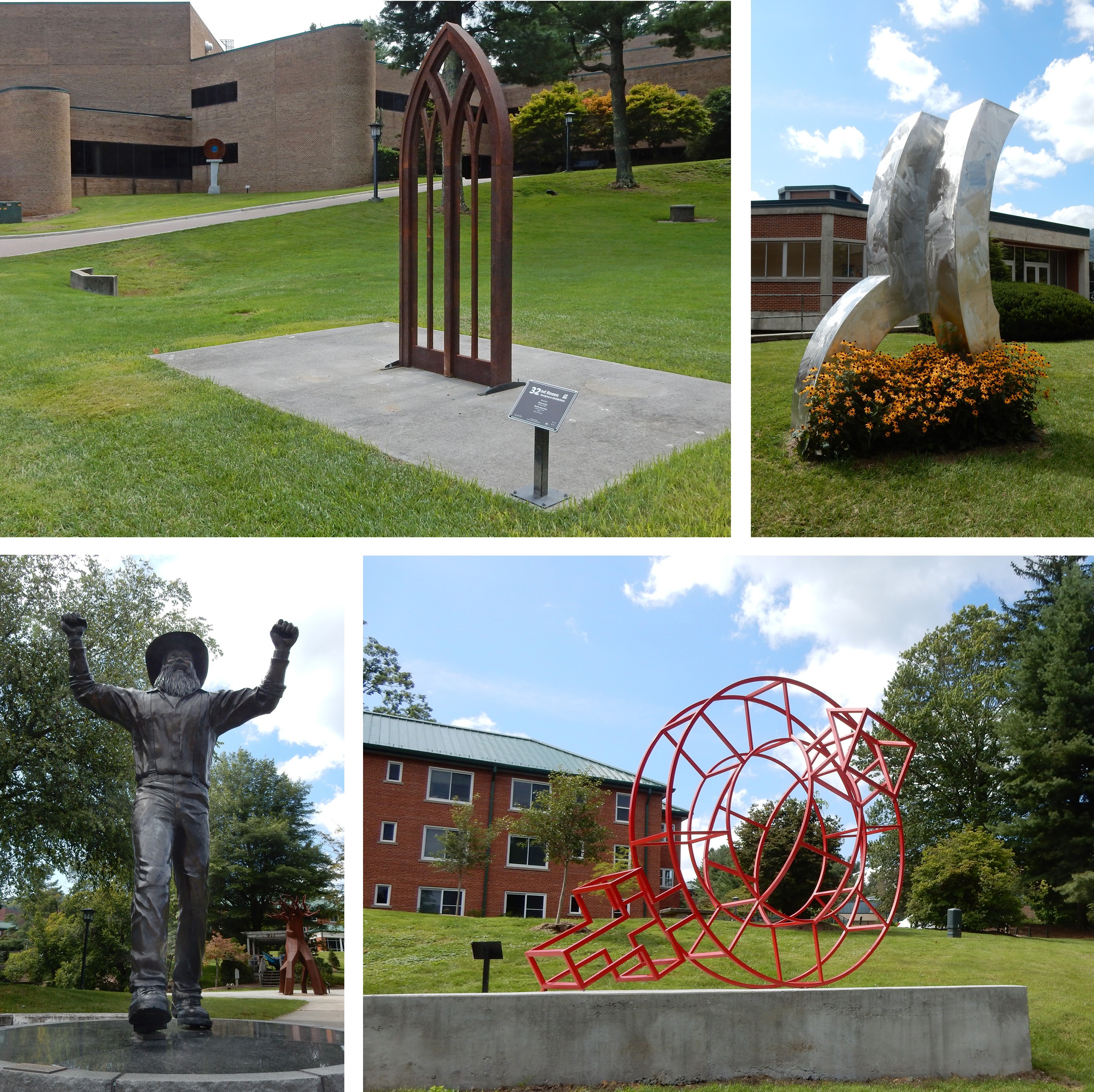 Turn right down Appalachian Street – we’re heading for a little diversion. The Appalachian State University campus hosts the Rosen Sculpture Competition each year. The works are displayed in grassy areas and along the sidewalk thoroughfares of the campus. Walking across the parking lot at the end of Appalachian Street and crossing Rivers Street, you’ll spot the Schaefer Performing Arts Center. Several sculptures are in place to the right, front, and left of the building, and you’ll find information inside for upcoming performances from the likes of The North Carolina Symphony, Stephen Stills & Judy Collins, and Herbie Hancock. The staff can also help with some information on the sculptures. We think it’s fun to look at the works of art and make up our own stories before discovering the artists’ true inspiration.

Once you make a circle of campus and head back up by the new App State Library (you should walk inside, the rotunda is beautiful), head back over to King Street and turn left in front of the First Baptist Church. Right next door is the Turchin Center for the Visual Arts. It features several galleries filled with works from local and international artists. In addition to showcasing established and emerging artists, the Turchin Center offers workshops for those interested in art or who want to enhance their skills. They even host opportunities to practice Tai Chi in the galleries. This is another great stop on First Fridays for its gallery openings and special programming.

By now, you might be thinking about supper. With more than 20 restaurants in Downtown Boone, you shouldn’t go hungry. From Asian to pizza and down-home to international garlic house, there is something to suit anyone’s palate.

On a “we can’t wait” note, the Appalachian Theatre is slated to open in 2019. Built in 1938, it was home to live performances and movies. When it reopens, it will host local theatre, live music, events, movies, and more. You can learn more about the theatre with a click HERE. Also, the Horton Hotel is nearing its opening date. Sporting 15 guest rooms and a rooftop bar, the Horton Hotel will be in the midst of everything. Oh, and we should say, if you want to stay downtown now, you can always check-in at the Lovill House Inn B&B. Located at the west end of town, it is quiet and within easy walking distance of restaurants and shopping.

Whew! That was a whirlwind in Downtown Boone. We didn’t mention Howard’s Knob, where the world’s largest windmill once sat or the Watauga County Library, where you can do genealogical research and enjoy cool programs for kids. We hope you might reference our other 24 Hours In series, which currently includes Asheville, Waynesville, Knoxville, Greenville, Hendersonville, Winston-Salem, and Valle Crucis if you are planning a visit.